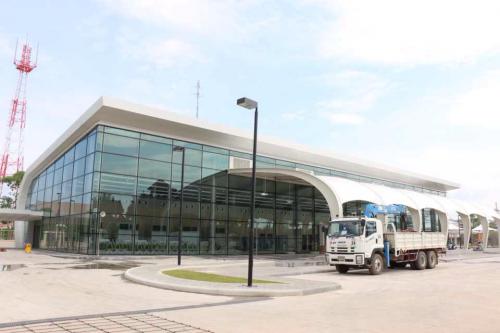 PHUKET: The new terminal at Phuket International Airport is on track to open on February 5, boosting the capacity of the island’s critical tourism portal by 4,000 people per hour.

“The actual construction of the terminal is finished. There is only cleaning up and interior decoration to be done. The grand opening ceremony will be on February 1,” he said.

Terminal X will serve as a passenger and baggage check-in facility for departing international charter flights.

“Nearly one third of all international passengers arrive and depart on international charter flights,” explained Kiettichai Wongmonta, head of the Engineering Maintenance Division at the Airports of Thailand (AoT) Phuket office.

“As no planes will dock at Terminal X, all tourists entering or leaving the country must clear immigration and customs at the old terminal.”

A free shuttle bus will be provided to take tourists from Terminal X to the existing terminal, he added.

As part of the larger 5.8-billion-baht airport expansion project, a new international terminal, complete with its own immigration and customs clearance counters, is under construction.

“Once complete, this will be dedicated to serving international passengers only and the existing main terminal will be refurbished and used for domestic passengers,” Mr Kiettichai explained.

As with the current terminal, Terminal X will also have free WiFi.

“We are still ironing out a few technical issues with the free WiFi in the old terminal, but once that is done we will make sure the new terminal also has free WiFi for passengers and visitors,” Mr Kiettichai said.

Among the other major projects underway as part of the expansion project is a five-story car park, which is expected to provide much-needed relief for motorists who currently must use the overburdened parking lot in front of the old terminal.

“The new car park will be able to accommodate 1,500 vehicles when it opens in March,” Mr Kiettichai said.

It is not yet decided whether taxis or other transport vehicles will be allowed to use the facility.

“The airport expansion project is making good progress and is on time for completion by the May 3, 2015 deadline,” Mr Kiettichai confirmed.

“We expect five more aircraft bays to be finished in time for the upcoming Songkran Festival in April,” he noted.

“Additionally, work is underway on a new office building and a new cargo building. The expansion project also includes new equipment that will make it much easier for us to handle the increasing number of people using the airport.”