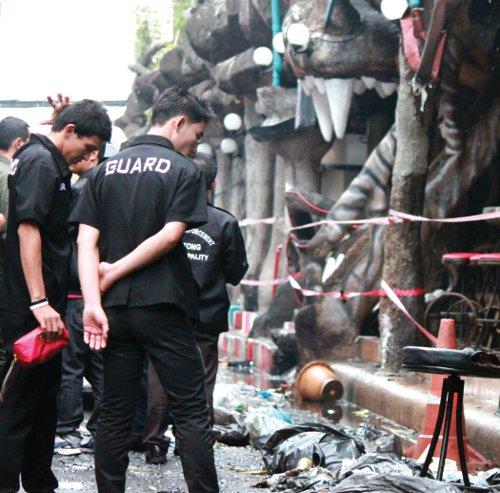 PHUKET: The need for a quicker exit from Phuket’s nightlife capital of Patong was highlighted by the chaos on the road in the early hours of April 11, after a 7.3-magnitude, submarine earthquake, that struck off Sumatra, caused the National Disaster Warning Center to issue a tsunami “alert” (not a warning) that had coastal residents heading for the hills.

A second panic ensued a few days later on the afternoon of April 16, when the island was shaken by 4.3-magnitude earthquake centered in Phuket’s Srisoonthorn district.

This once again put the effectiveness of the government warning system in question, as the strongest earthquake to hit the island in recorded history was followed by a complete disruption in mobile phone services and a complete lack of public information in the state media.

Of the many fires on the island over the past year, none was more deadly than the Tiger Discotheque blaze that killed four people, including two foreigners, on August 17.

The inferno broke out in the busy disco some two hours after the legal closing time.

Fueled by highly-flammable polystyrene foam, the fire quickly engulfed the disco, forcing many patrons to jump to safety.

Of the many fatal road accidents in 2012, none received more attention abroad than the case of four young Swedish tourists staying in Phuket who were killed, along with their Thai driver, in a head-on collision with a refrigerated transport truck in Phang Nga in February.

They were heading to a diving trip in Surat Thani when the driver of the truck lost control, crossed over a wide median strip and hit their car head on.

The driver fled the scene, but later turned himself in. He was fined 20,000 baht and released. The court did not release any other details about the case.

Phuket ushers in the New Year 2013