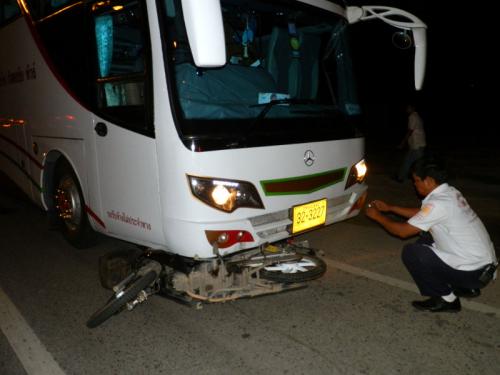 PHUKET: Two men on a motorcycle on Thepkrasattri Road in Thalang were hit and crushed under a Phuket tour bus early this morning, bringing to seven the number of deaths in the ongoing “Seven Days of Danger” new year road-safety campaign.

As is relatively standard practice in Phuket, the bus driver fled the scene and is being sought by the police.

Capt Patiwat Yodkwan of the Thalang Police station was called to the scene of the accident, at a u-turn near the Tesco Thalang shopping complex, at 1:10am.

“There were two badly damaged bodies on the road and a bus full of frightened passengers. The driver had left the scene.

“The bus had yellow plates, was registered in Bangkok and was marked as a Passornchai Tour Company vehicle,” Capt Patiwat said.

The motorcycle that victims Adul Sutthisarn, 44, and Pairote Hemmin, 39, had been riding was lodged under a front wheel of the bus.

“The two bodies were transferred to the Thalang Hospital morgue,” Capt Patiwat said.

Police are investigating the cause of the accident, he added.