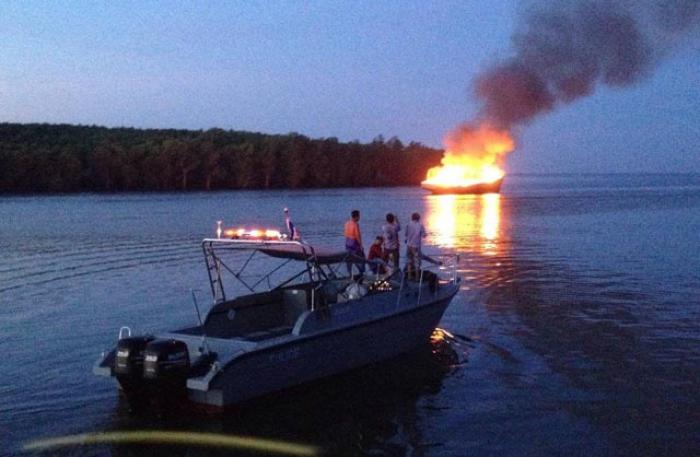 PHUKET: Police are investigating the cause of a fire which gutted two Phi Phi cargo boats anchored off Krabi early yesterday morning.

Fire fighters responded to reports that Unity 2 and Unity 3 were ablaze near the Ko Huang Fishing Pier in Saithai Sub-district at about 5am.

“The boats were too far from shore for firefighters to try to save them,” said Maj Jarun Nabpet of the Krabi City Police. “We also heard an explosion.”

No people were on board either boat, he confirmed.

“They were originally anchored much closer to shore,” he said.

“Local fishermen believe that the fire burned through Unity 2‘s anchor rope, which allowed it to drift. The same must have happened with Unity 3.”

The boats were not loaded with any goods, he noted.

Witnesses told police that they saw Unity 2 on fire first.

“Unity 2 then floated alongside Unity 3, setting that boat on fire,” Maj Jarun said.

Damage to the boats has been estimated at more than 4 million baht.

“At this stage we believe the fire was started by a short circuit on Unity 2,” Maj Jarun said. “However, we have yet to question the boat owner, who lives in another province, and forensic officers have yet to conclude their investigation.”