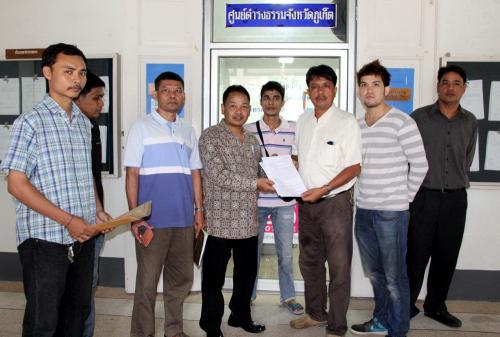 PHUKET: Patong tuk-tuk drivers yesterday filed their second complaint with the governor about illegal tuk-tuks operating in Patong and stealing their jobs.

The drivers asked for an update on the complaint they filed on June 26 (story here) and noted that the numbers of illegal drivers continues to increase.

“On June 26, we filed a complaint to Governor Maitri Inthusut against tuk-tuk drivers who had adapted private vehicles to use as tuk-tuks and serve passengers without registering their vehicles as taxis,” said Sakol Srisompoch, the leader of the group of 10 tuk-tuk driver representatives who filed the complaint.

“However, the number of these illegal tuk-tuks is growing and they have stolen many of our passengers,” he said.

“We were told last time that officers would be stricter with the illegal drivers and press serious charges against them, but this isn’t happening, so we are filing a second complaint to remind them that the problem still exists,” he said.

Their complaint was received by Prapan Kanprasang, the chief of the Damrongtham Center (Ombudsman’s Office), who promised to pass it on to Phuket Vice Governor Chamroen Tipayapongtada.

“V/Gov Chamroen has responsibility for the illegal tuk-tuks and taxi drivers and will report back to the Patong tuk-tuk operators soon,” Mr Prapan said.

Phuket Police close in on shooter of Russian tourist