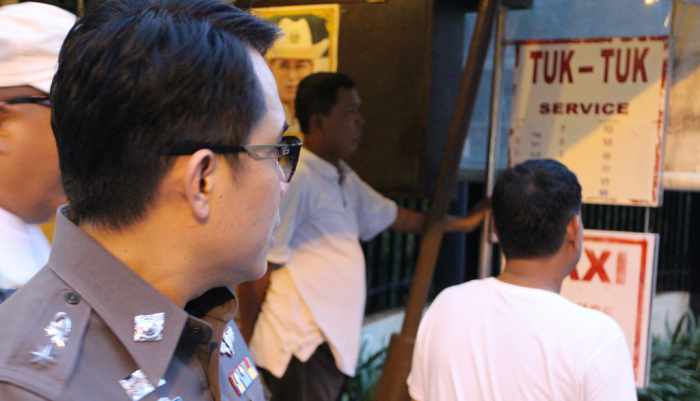 PHUKET: Patong taxi operators and beach vendors will stage a media conference this evening to express their opinion about the police-led destruction of taxi booths in the beach town last Friday (story here).

“We just want everyone to hear our views and to understand what effect the destruction of our booths has had on us,” said one of the organizers, who asked not to be named.

“We’re writing press releases to give to reporters and will answer any questions the media may have,” he added.

The gathering, at 6pm at Loma Park, will be a media conference, not a political gathering, he said.

“I think we have the right to do it under martial law.”

The organizer was unsure how many taxi and tuk-tuk drivers would attend the meeting, but confirmed that the group would not block the road.

Meanwhile, the president of the Patong tuk-tuk drivers, Sakol Srisompoch, confirmed that no legally operating tuk-tuks in the beach town would join the event.

“I haven’t heard about it, and our members will not be a part of that conference,” said Mr Sakol.

“It’s possibly a group of illegal drivers who lost their jobs in the crackdown and want to say something to the media,” he suggested.