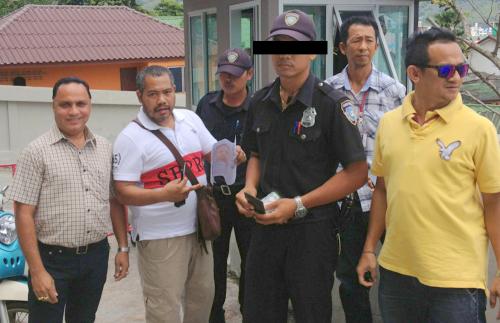 PHUKET: Police yesterday arrested a security guard at a Patong apartment complex on an outstanding warrant for statutory rape in Samut Prakan, near Bangkok, eight years ago.

Patong Police Superintendent Chiraphat Pochanaphan told the Phuket Gazette today that the man, 36, originally from Phetchabun, was wanted on an arrest warrant issued by Samut Prakan Provincial Court on July 4, 2005.

“The man fled Samut Prakan and came to Phuket where he worked as a security guard for an apartment complex in Soi Nanai in Patong,” said Col Chiraphat.

“We arrested him at about 5pm while he was on duty,” he added.

The man was wanted for breach of Section 277 of the Thai Criminal Code, which stipulates: “Whoever, has sexual intercourse with a girl not yet over 15 years of age and not being his own wife, whether such girl shall consent or not, shall be punished with imprisonment of four to 20 years and fined 8,000 to 40,000 baht.”

“We will question him and then send him back to Bang Phli District Police Station in Samut Prakan,” Col Chiraphat explained.