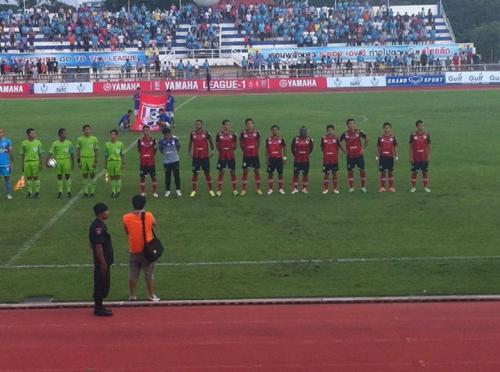 PHUKET: Allegations of match-fixing and crooked referees have become rampant in the Facebook fan club forums of many Thai football teams, including Phuket FC, as the Yamaha League One enters its final stretch of the 2013 season.

Although no concrete ties have been made between match-fixing and the shooting earlier this month of controversial Thai referee, Thanom Barikut, there is no question of a connection in the eyes of many fans. (story here)

“It’s no wonder Thai referees are getting shot, it’s 100 per cent clear this match was fixed,” wrote one fan in response to a video clip posted of the highlights between Rayong FC and Phuket FC.

The match, both sides 28th of the 34-fixture season, was played out to a 1-0 scoreline on Saturday in Rayong, the winning result going to the home team thanks to a penalty kick that was granted after what many Phuket supporters deemed a questionable call.

Although Phuket had put the ball past the goal line at least once in the match, they were questionably denied by the official’s checkered offsides flag.

Fans of at least two more teams suspect Rayong of match fixing; the second-to-bottom team also recently beat the 3rd placed Port Lions and 10th placed Trat FC thanks to “dubious calls” similar to those made in their Phuket fixture.

Dwindling in 17th place of the 18-team league, Rayong are in danger of being relegated to the Division 2 regional leagues, and it’s clear that only wins will save them from relegation.

However, the Gazette notes that motive and suspicion alone do not equate to actual evidence.

“Although it’s obvious and in your face that these calls [against Phuket] were bogus, we all know why Phuket will not appeal [as] nothing will come out of this,” read another comment.

Meanwhile, 9th placed Phuket return home for their next match, this Saturday against Trat FC – the White Elephants. Kickoff will be at 6:30pm at Surakul Stadium.