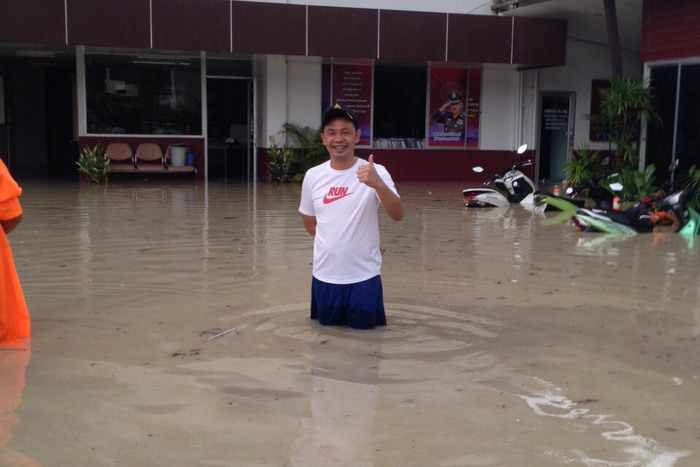 PHUKET: The carpark and first floor of Patong Police Station were underwater early this morning as a heavy rainstorm blasted through Phuket.

“The flash flooding started at about 5am and lasted a couple of hours,” Lt Col Suttichai Tianpho of the Patong Police told the Phuket Gazette.

“Some of our computers were damaged during the flood, as we were not able to move them to a higher floor in time.

“The water is now being drained from the building. Everything else at the station is running normally,” said Col Suttichai

Motorists on Nanai Road and Rat-U-Thit 200 Pi Road also found themselves in difficulty this morning as the two roads were stuck in the deluge.

Patong Hospital was affected by the storm, but able to recover quickly.

“Rainwater flooded the carpark, but our ambulances were still able to get in and out. It has now been drained,” Patong Hospital Director Sirichai Silpa-archa confirmed to the Gazette.

We can’t save drivers from themselves: Phuket police