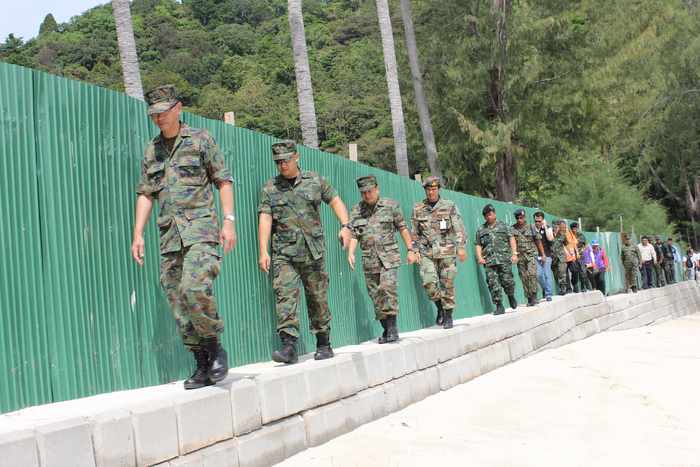 An impressive crew of about 500 military personnel and local officials arrived at the beach towns to enforce a 30-day beach clear-out deadline that expired yesterday; a mammoth mission that started in Patong (story here).

“Patong Bay will stay, as Mr Prab was able to present a legitimate Chanote title. We have already checked its legality with the Land Office,” Col Somchai of the Army’s 41st Military Circle told the Phuket Gazette yesterday.

“However, there was an area in front of the resort where sand bags had been buried to create a bank. We have ordered them to remove the bags and restore the ground to its natural level.”

Officials also visited the White Box Restaurant on Kalim Beach and found that restaurant staff had already begun tearing down parts of the building the military had previously ordered them to remove.

“The Navy did not interfere in the tear-down of White Box, as staff were already doing it themselves,” said Col Somchai.

“Military personnel led by Commander of the Royal Thai Army Region 4 Walit Rojanapakd will return to Phuket on August 19 to evaluate the beaches and make sure that all orders have been followed,” he added.

“Eleven other illegal structures on part of the beachfront under the control of Sakoo OrBorTor – not inside the park – are also being torn down.”

A separate operation in Cherng Talay involved about 200 officials.

“We are enforcing the National Council for Peace and Order [NCPO]’s order to stamp out beach encroachment. We are confident the beaches will be cleared out and ready by the time Gen Walit visits on Tuesday,” he noted.