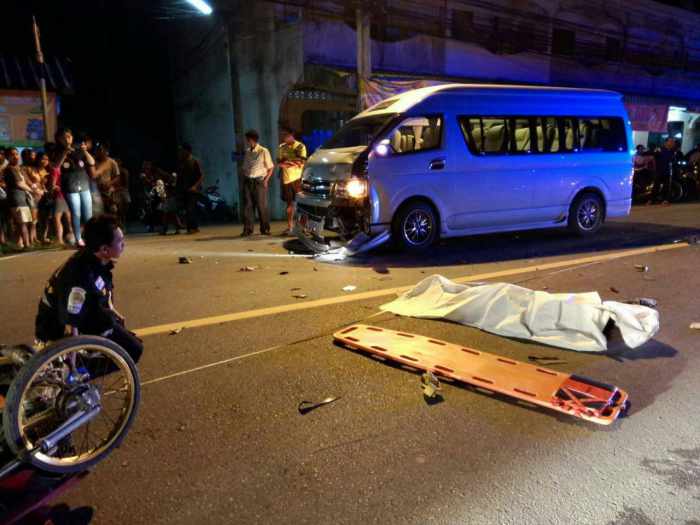 PHUKET: There will be no concerted effort by Phuket police to ramp up road safety despite six people – including three teenagers – being killed in road accidents in less than 24 hours last weekend.

Phuket’s road nightmare began on August 8, when Red Mountain Golf Course caddy Sakon Banchongkaeo, 34, died after the motorbike on which she was riding pillion collided with a pick-up truck on the Koh Kaew-Nakok Road, often used as a shortcut from Thepkrasattri Road in Koh Kaew to Patong (story here).

At about 9pm that night across town, Winai Laksanawilart, 45, died instantly when the motorbike he was riding collided head-on with a passenger van on Rassada-Nusorn Road (story here).

Witnesses said Mr Winai was heading east at high speed and crossed into the oncoming lane as a van was heading toward him, said Lt Col Chaliao Thaihoo of the Phuket City Police.

“He died instantly,” said Col Chaliao. “His head hit the road and he was not wearing a helmet.”

Less than three hours later, three teenagers suffered fatal injuries after the car they were travelling in spun out of control and slammed into a power pole on Phra Phuket Road in Kathu.

The driver, Hassanee Wangtan, 18, from Cherng Talay, died at the scene, pinned behind the wheel. Passengers Supissara Boonmee, 16, and Sutthinee Thabtawee, 17, were pronounced dead on arrival at Vachira Phuket Hospital in Phuket Town about 30 minutes later (story here).

Then, before dawn that same night, Italian tourist Dario Bartotati, 32, died after the Ducati motorbike he was riding slammed into a roadside ditch in the hills to the north of Karon (story here).

Mr Bartotati died of severe head trauma. He was not wearing a helmet, said police.

“Our job is law enforcement, to make sure motorists do not break traffic laws. This is all we can do to protect people from accidents,” Phuket Provincial Police Deputy Commander Sakchai Limcharoen told the Phuket Gazette on Wednesday.

Other than static checkpoints, Col Sakchai offered no other strategy by the Phuket Police to reduce the carnage on the island’s roads.

According to Col Sakchai, the four main factors that cause road accidents are: the driver, the vehicle, the road and the environment.

“Drivers are the worst issue faced by police,” he said. “Roads are not our responsibility, but they can be fixed. If the road is in poor condition, then drive carefully.

“Vehicles can maintained to be kept safe, but that too is a driver’s responsibility, and we cannot do anything about environmental factors – such as strong wind and rain – so it is up to the driver to be careful.”

Col Sakchai said that there are 1,500 police officers stationed on the island to protect the people, which he said was far too few to be effective in improving road safety.

“These 1,500 officers look after local residents and tourists – we are doing our best. The police are not shirking their responsibility, but if you want to be safe on the road, then it is up to you,” he said.

“If you ride a motorbike, wear a helmet. If you are going out drinking, then don’t drive. This will save your life and you will not be arrested by police. Road safety is easy once you make a habit of it.”