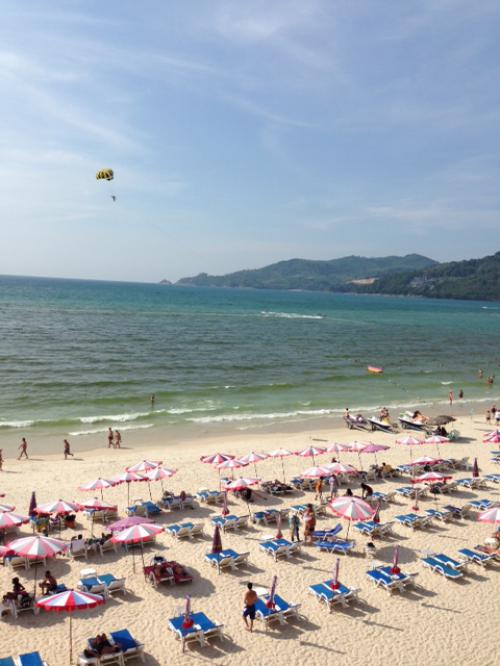 “People swimming and enjoying the beach should not panic about the color of the water. They can swim as usual – it will not affect their health,” Mr Suppakorn said.

“The brown color doesn’t mean the water is dirty,” he explained. “It’s due to the photosynthesis of plankton.”

As for the stink, Mr Suppakorn said that it comes from the Pak Bang Canal where the sun heats the water during low tide. The odor is not dangerous either, he added.

This is not the first time Patong has seen brown, smelly seawater. It has faced a similar problem with “big brown” water in previous years and as recently as last August (story here).

“We hire a private company to conduct water quality testing in the area every other month,” Mr Suppakorn said.

“The tests on January 23 showed that the quality of the water falls within the marine
water quality standards of the Pollution Control Department (PCD). Water treatment reports from hotels also do not exceed the department’s quality standards.”

Nevertheless, the Regional Environmental Office is planning further testing in Patong in two weeks to further assure tourists that the seawater quality is at a healthy level, Mr Suppakorn added.

The Regional Environmental Office isn’t the only government agency testing the water in Patong Bay. The Phuket Marine Biological Center tests it every two months. However, the PMBC, unfortunately, has not been transparent in releasing its test results (story here).

Instead of posting the details of its seawater quality tests on line, the center will publish only its self-designed star rating system, PMBC Director Ukkrit Satapoomin told the Gazette in December.

The star ratings reveal whether the PMBC considers the water at Phuket’s famous beaches as very good, good, fair, poor or very poor.

In its most recent report, labelled “Marine Water Quality along the Coastline of Phuket in 2013”, the PMBC declares that the seawater at Patong Beach was in “good condition”.

However, the water in the north and central areas of that beach was rated only “fair”, and Dr Ukkrit declined to explain why the quality was different in these areas.

The move followed a meeting in Phuket with ambassadors from 17 European nations to raise awareness of beach safety issues (video story here).