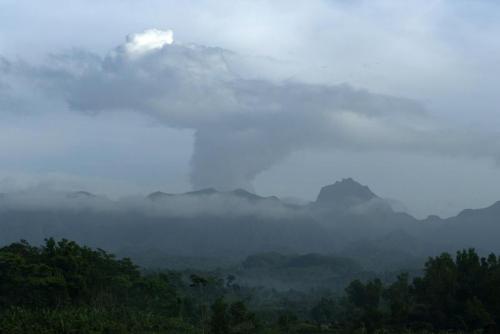 PHUKET: Ash fall from a volcano that erupted late last night on the heavily populated Indonesian island of Java has forced an Australian airline to cancel flights to Phuket, Denpasar, Christmas Island and Cocos Island today.

“We are sorry for the inconvenience. However, the safety of our customers is our highest priority,” Virgin Australia airline said in a statement on their website. “Our meteorologists are continually monitoring the weather situation, in consultation with the Volcanic Ash Advisory Centre in Darwin, and we will recommence normal operations as soon as the volcanic ash cloud safely allows it.”

However, flights are expected to be back on schedule by tomorrow, Virgin Australia said on its Facebook page.

Airports of Thailand (AoT) confirmed to the Phuket Gazette that tonight’s Virgin Australia flight from Phuket to Perth has been cancelled and that flights will be back on schedule tomorrow.

The eruption from Mount Kelud sent a huge plume of ash and sand 17 kilometers into the air, forcing the closure of three airports, reported Reuters.

The volcano is no longer erupting and the cloud is beginning to dissipate, said Indonesia’s National Disaster Mitigation Agency.

The agency has yet to confirm reports of two deaths in the natural disaster.

An estimated population of 200,000 people live within a 10km radius of Mount Kelud, one of nearly 130 active volcanoes in Indonesia.