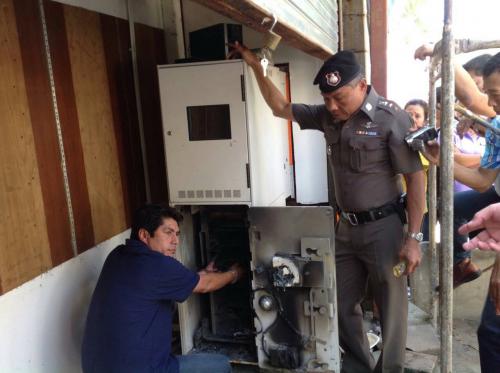 PHUKET: The trio of professional thieves who were busted in Bangkok after robbing an ATM in Phuket were caught with what police believe to be ATM skimming equipment in addition to safe-cracking tools.

Yesid Alexander Ledesma Gutierrez, 50, Luis Fernando Guarin Suta, 44, and Carlos Arturo Amariles Marin, 57 have all confessed to the blowtorch robbery, and took part in a re-enactment of it yesterday morning (story here).

“We found a piece of equipment that looks like a camera that can be attached to an ATM to skim cards. We are further investigating the possibility that the men are part of an ATM skimming gang,” Phuket Provincial Deputy Commander Arun Kaewwatee said.

“The suspects flew from Mexico to Hat Yai via Singapore. They then rented a car in Krabi and drove to Phuket, checking into a hotel in Patong to scout the area for the next two days,” Lt Col Somsak Tongkliang said.

During the re-enactment Mr Suta and Mr Marin demonstrated how they broke into the ATM, while Mr Gutierrez positioned himself as the the driver of the getaway car.

“After they got the money, they dropped the empty ATM cassettes about 200 meters from the scene,” Lt Col Somsak said.

In the process of cutting through the ATM the thieves severely burned the bottom ATM cassette, which contained 1.4 million baht worth of 1,000 baht notes.

“The suspects thought that the money inside was probably burned too, and left it behind,” Col Somsak said.

Phuket’s top cop Ong-art Phiwruangnont explained that the re-enactment took place to clarify events, and because it was non-violent crime.