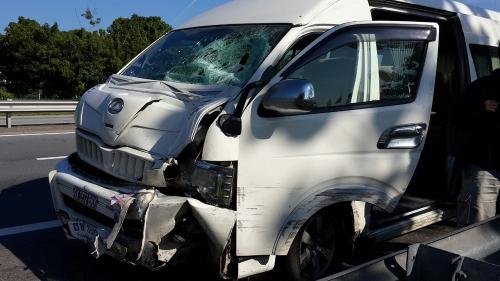 PHUKET: A KBV Visa Run van that left Phuket for Penang last night collided with a motorbike in Malaysia at about 9:30 this morning.

Ukrainian Dmytro Kolot, 30, was in the van and called a Russian friend in Phuket, Oleg Spitsin, to report the accident.

“Dmytro was sitting next to the driver. He said the van was travelling at a normal speed, but the driver fell asleep,” said Mr Spitsin.

According to Mr Kolot, the motorbike driver was killed in the accident.

“Dmytro got glass in his arm from the accident, and said that other passengers were injured as well,” Mr Spitsin said.

A staff member of KBV Visa Run company told the Phuket Gazette this afternoon that the passengers and driver were safe and at their hotel in Penang awaiting their visas.

“Nobody is in the hospital,” he said. “We are preparing another van to bring them back to Phuket.”

No amnesty for Phuket foreigners waiting for work permits