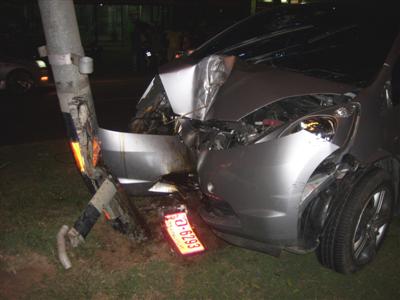 PHUKET: Three women rushing to catch a flight off Phuket last night crashed their rented car into a power pole, leaving one dead and the others injured.

Arriving at the scene with Kusoldharm volunteer rescue workers at about 8:30pm, Thalang Police found that a group of local residents had already removed the body of the deceased from the front passenger’s seat.

She was identified by the survivors as 56-year-old Paphaphat Wongphen.

The three Pathum Thani residents had come to Phuket on business and were hurrying to return their rented Honda Jazz to an agency near Phuket International Airport when Miss Thanalin lost control and crashed into a power pole on the median strip.

Rescue workers said her mother probably died instantly of a broken neck when she was thrown against the front console.

Although none of the passengers were wearing safety belts, the two survivors escaped with noncritical injuries and were taken to Thalang Hospital for treatment.

The front of rented car, still with Bangkok-issued red license plates indicating it was new, was destroyed by the impact.

In addition to the loss of her mother and her own injuries, Miss Thanalin faces charges of reckless driving resulting in death, damage to state property and liability for any damages to the rental car not covered under the mandatory insurance policy.