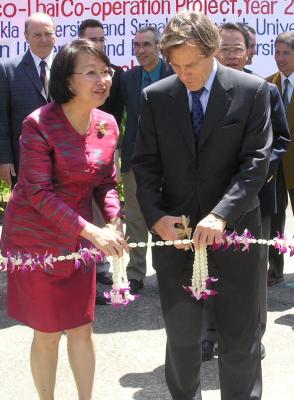 KATHU: The Prince of Songkla University (PSU) Phuket Campus has joined a 5.4-million-baht project aimed at developing better ways of catering for tourists visiting France and Thailand. The aim is to improve standards and promote education about tourism, and to exchange knowledge about the cultures of the two countries. PSU will work on the program with the Université de Perpignan and the Université de la Rochelle in France as well as Bangkok’s Srinakharinwirot University. The French government has allocated about 100,000 Euros (4.5 million baht) and the Thai government has set aside 900,000 baht for the four-year project that includes staff development training, research and student exchanges as well as graduate programs. An exchange program will be set up to allow academics from each country to research the tourism economy in the other. France is one the world’s most successful countries at attracting tourists. A major aim of the project is to help boost tourism in Thailand by studying this success to see how it might be applied in Thailand. The French academics, in turn, will get the chance to learn about a developing country’s tourism industry. At PSU for the official launch of the agreement on November 1, French Ambassador Laurent Aublin said France and Thailand were “important actors on the global scene.” Combining their creativity and excellence in services and research should produce favorable results. PSU Assistant Professor Dr Boonsom Siribumrungukha said that as well as improving service industry standards, the project should promote greater understanding for cultural, social and economic interaction between the countries. Dr Boonsom said that PSU planned to maintain cooperation with the other universities beyond 2007, when the project officially comes to a close.