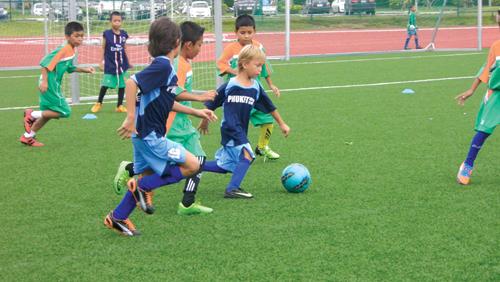 PHUKET: Phuket Soccer Schools (PSS) are preparing to host, coordinate and compete in a number of youth “footy” events in the coming months, and the academy looks to recruit more local talent to be help make sporting history.

PSS Head Coach Martin Hill said that the main attraction of becoming a PSS Academy player is to represent the club at tournaments – at a local, national, regional and international level.

“This coming September sees our very first 2-day regional tournament coming to Thanyapura and plans are well under way in preparation for 32 teams from around Thailand competing for regional bragging rights ,” revealed Martin.

“Clubs from Pattaya, Samui and Bangkok are already confirmed as we now concentrate on finding competitive local clubs to compete,” he added.

Moreover, Phuket Soccer Schools is looking ahead to host their very successful annual international tournament again for the 4th time at Thanyapura in a 2-day event in February.

Each year, the event draws 40 teams, with four age groups (U8 – U14) playing small sided games (SSG) with teams and clubs from all over Asia competing for the PSS trophies and plates.

No players leave empty handed as all players receive tournament medals for competing.
This year PSS is looking to introduce tournament T-shirts too, and cordially invites any local business to sponsor any tournament and/or talented under-privilege players to participate in our pinnacle “Academy” program.

Any local experienced players born between 1999 – 2006 (2549 – 2542 B.E.) can contact Phuket Soccer Schools to arrange a trial. To find out more information on the Academy Program, email: info@phuketsoccerschools.com.

PSS Academy program will begin on Saturday September 7 at Thanyapura.