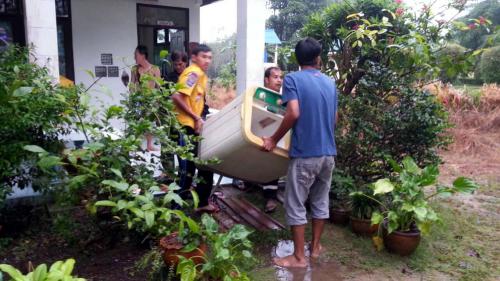 PHUKET: A python snuggled in an old washing machine about to enjoy a dinner of house cat was interrupted when the cat’s owner walked by and caught him in the act.

As Narongsak Laksanawisit walked out of his house in Baan Danyid in Mai Khao yesterday evening, he passed the washing machine and saw his cat’s body in it. Then he saw a snake’s tail.

“I think the snake had just squeezed it to death and was about to eat it,” Mr Narongsak said.

“I took the cat’s body out to bury it and called the rescue foundation for help,” he said.

When Kusoldharm Foundation Rescue workers arrived, they first moved the machine out into the street to give themselves more room to maneuver. It then took them 30 minutes to extricate the reptile.

“The python was hidden in the back of the washing machine. We had to take off the back and the bottom to get it out. It was about two and a half meters long,” one rescue worker said.

As is standard practice with captured pythons in Phuket, the snake was bagged and released in an undisclosed jungle location.

PSS to put Phuket on the map