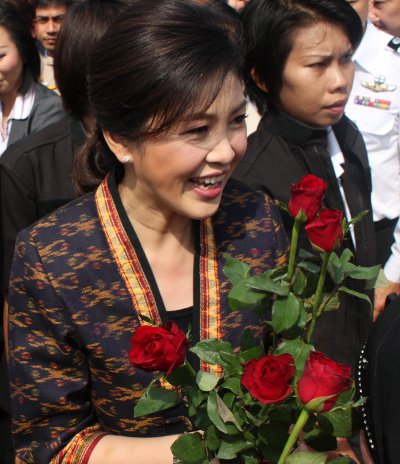 PHUKET: Officials in Krabi province, across Phang Nga Bay from Phuket, are ramping up security ahead of a lightning visit by Prime Minister Yingluck Shinawatra on Saturday, when she will head a meeting of provincial governors from the five provinces of the “Andaman cluster” to discuss “disaster preparedness”.

PM Yingluck will attend the foundation-stone laying ceremony for the new emergency ward at Krabi Hospital, in Krabi Town, before gracing a dinner talk on the subject: “Amazing Krabi, the great emerald of Andaman”.

The new emergency ward is the result of a Cabinet resolution made during the mobile Cabinet meeting in Phuket earlier this year, explained Krabi Governor Prasit Osathanon today.

“The project was approved by Cabinet in Phuket in March, and now we have received the 99 million baht budget for the project,” he added.

Between her two key engagements, PM Yingluck is scheduled to visit the Imam at the Krabi Central Mosque and then pay her respects to the abbot at Kaew Korawararam Temple in Krabi Town.

“Then she will come to Krabi Provincial Hall to meet the governors of the five provinces of the ‘Andaman cluster’ to discuss disaster prevention along the Andaman coast,” Gov Prasit explained.

With Phuket Governor Tri Augkaradacha in Nepal on a cultural tourism roadshow, the Phuket Provincial Office is expected to send one of Phuket’s three vice-governors in his place.

“In the evening, PM Yingluck will attend a dinner talk seminar organized by the Krabi Provincial Office and Matichon Group at the Sofitel Phokeethra Krabi Resort & Spa. The seminar topic will be about the direction of sustainable tourism policy in the Andaman coast provinces,” said Gov Prasit.

“The Krabi Provincial Office has already prepared high-security measures to protect PM Yingluck during her visit. We have contacted the local army barracks, police officers and Border Patrol Police volunteers to make sure that PM Yingluck will be safe,” he added.