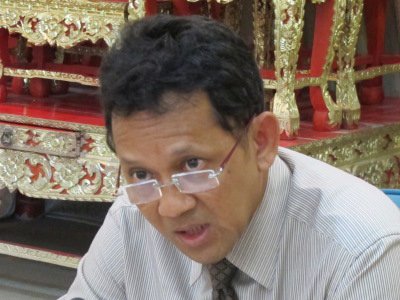 PHUKET: Phuket jewelry shops that overcharge tourists and tour companies that hire illegal guides are to be targeted by the latest campaign by provincial authorities to preserve a “billion baht” business, officials were told this week.

“I want tour companies to follow the law. Their main tour guides must be Thai. If they do not, they will be in trouble,” Phuket Vice Governor Chamroen Tipayapongtada told a meeting at Phuket Provincial Hall on Tuesday.

“We have been trying to solve the problem with illegal guides for 15 years. I need to take stern action.

“We have received so many complaints about illegal tour guides of different nationalities that we have to try do something to manage them. Different agencies must coordinate in inspecting each operator we receive a complaint about,” he said.

He also cautioned that the authorities could not ease off on operators who keep breaking the law.

V/Gov Chamroen asked the Phuket Professional Guide Association to draw up a plan of action for tackling the ongoing problem of illegal tour guides working in Phuket.

“Although at this stage we cannot set a deadline for determining whether or not the plan is successful, we will continually carry out inspections of operators that we have received complaints about,” he said.

Turning his attention to rip-off jewelry merchants, V/Gov Chamroen called on Phuket Commerce Office chief Prakong Rukwong to draw up an action plan of corrective measures to take against jewelry shops that his office had received complaints about.

He also said he would ask officers from the Office of the Consumer Protection Board in Bangkok to come to Phuket to assist with inspecting dubious merchants.

Present at the meeting were representatives of five big jewelry shops in Phuket, including Wang Talang Jewelry and Gift Shop. All five representatives said they had not received any complaints about their stores.

However, V/Gov Chamroen pointed out that the smaller jewelry shops were more likely the culprits in ripping off tourists by charging inflated prices for lackluster jewelry.

“Recognized jewelry stores are not likely to have this problem because if they receive a complaint, it could ruin their reputation and cost their industry billions of baht,” he said.

“Most big shops don’t receive any complaints from tourists as their jewelry always comes with certificates confirming details of the item of jewelry and a statement of verified value.

“Small shops and stalls, however, usually do not offer such certificates for the jewelry they sell,” he said.

Chief Prakong said he would focus on having all jewelry merchants provide customers with certificates for the jewelry they buy, as required by law.

However, V/Gov Chamroen suggested using corporate branding as leverage in getting small jewelry merchants to comply.

“Phuket Commerce officers have to inspect small merchants to make sure they understand what is required of them by law, and they should support small operators in creating a brand for their stores.

“If small merchants create a successful brand, they will think more carefully about their reputation if they make any problems,” V/Gov Chamroen said.