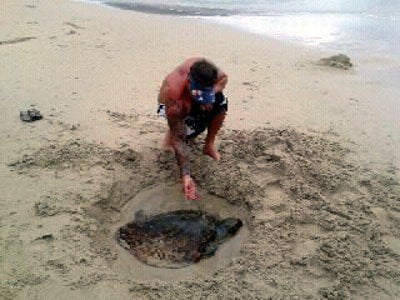 PHUKET: Yet another female sea turtle was rescued on Phuket’s shores yesterday, after suffering lacerations to its flipper from fishing nets.

“I believe she was swimming close to the shore to mate, but was caught in a fishing net and injured herself trying to escape from it. Judging from the condition of the wound, I would suspect she was hurt about a month ago,” Dr Kongkiat said.

The turtle was taken back to the PMBC for treatment, he added.

Also yesterday, Dr Kongkiat received a report from villagers that they had found an adult Leatherback sea turtle washed onto a beach on Koh Prathong in Phang Nga.

“The villagers buried its body on the beach, since it was already dead,” he told the Gazette.