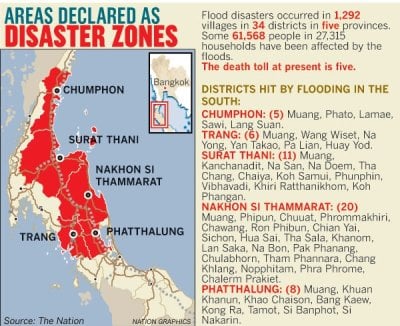 PHUKET: The Prime Minister’s Office has warned residents in Phuket to brace for flooding, which has already stalled services at Nakhon Sri Thammarat and Samui airports.

Thousands of passengers were stranded on Koh Samui in Surat Thani province yesterday, while Nakhon Sri Thammarat Airport has been closed since Sunday.

Bangkok Airways canceled all 36 domestic and international flights in and out of Samui yesterday, due to the severe thunderstorms hitting the island and the surrounding area.

The airline said affected passengers should contact its ticketing office to rebook their flights at no additional charge.

Tourists on the island of Samui had completely lost access to the mainland as of press time because ferry services were also suspended.

As the severe flooding raged on in the South, the death toll rose to nine.

Minister to the Prime Minister’s Office Satit Wongnongtaey, who chairs a committee on flood-relief operations, yesterday told inhabitants and authorities in Phang Nga and Phuket provinces also to brace for possible flooding, with heavy downpours expected to continue in the South until tomorrow.

“We are paying great attention to landslide risks. People in risk areas have already been evacuated,” Mr Satit said. There are 28 landslide-prone spots in Phatthalung alone.

In the wake of the serious flooding, Nakhon Sri Thammarat Governor Thira Mintarasak said he had declared the whole province a disaster zone.

“The situation is worrying. I have instructed rescue workers to help get the sick, the elderly, pregnant women, children and those with disabilities out of risk areas first,” he said.

Floodwater was still more than one meter deep at various locations in Nakhon Sri Thammarat yesterday.

Transport Minister Sophon Saram told the Cabinet that although the water level at Nakhon Sri Thammarat Airport had dropped, it was still raining in the area.

He said officials would have to check infrastructure at the airport before deciding whether it was safe to resume services.

Civil Aviation Department Director-General Somchai Janrod said the water level at the airport had fallen from 50 to 20 centimeters. “We have assigned officials to clean and clear the runaway and taxiways,” he said.

He added that it would take at least a week to check the electrical system because the power supply had been cut at the airport.

The situation in other parts of Nakhon Sri Thammarat province is also serious.

He said his hospital had already transferred more than 30 inpatients to another medical facility because of the rising floodwater.

Kitti added that the flooding had caused about 40 million baht in damage to medical equipment and a power generator.

Public Health Minister Jurin Laksanawisit said the floods had also ravaged 10 other hospitals in the South.

There were now eight confirmed deaths, seven of them in Nakhon Si Thammarat and the other in Surat Thani, he said.

However, locals in Phatthalung reported a ninth death, that of seven-year-old Zordeeleen Senkliang.

To date, 13 districts of Surat Thani have been declared disaster zones, with the inundation causing damage to four bridges, 11 roads and two temples.

Meanwhile, just as the floods have been raging in the South, Mr Satit said 47 other provinces were suffering from drought.