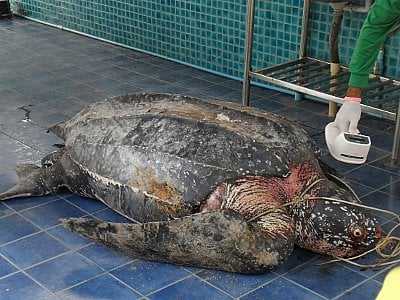 PHUKET: A dead 200-kilogram leatherback turtle washed up in Phuket earlier this month, adding to fears of the imminent extinction of the pacific subspecies.

The male, which had not quite reached full maturity, ingested a plastic bag and died from intestinal blockage, an autopsy by the Phuket Marine Biological Center (PMBC) revealed.

Sixty years ago, Phuket’s beaches were host to 400-500 leatherback turtle nests. Last year there were seven – this year there have been none.

This does not bode well for the turtle, as December, January and February mark the nesting season.

The Pacific subspecies of the leatherback is “the world’s most endangered marine turtle population”, with only about 2,300 females remaining, according to a World Wildlife Foundation (WWF) estimate.

Dr Kongkiat Kittiwattanawont from the PMBC explains why the pacific population has suffered so badly:

“There used to be direct hunting of sea turtles in Phuket about 40 years ago. Their shells and products were sold for export,” he says.

“Also, Thai people used to eat the eggs, and that is actually the main factor in the destruction of the population” he adds.

In the past, almost all leatherback eggs laid in Thailand were poached, the WWF reports.

“Now, because of campaigns and law changes, the public has become more educated and aware of this issue, and illegal consumption of sea turtles appears to be very rare,” he said.

But the damage has been done. The survival of the species seems to have taken an irreparable blow from the years of poaching. And a variety of new threats have come about as a byproduct of Thailand’s economic development.

“Recently, new threats like coastal fishing have arisen. We have found many turtles caught in fishing gear. Pollution is another reason for the decline. We have found that about 5 to 10 per cent of sea turtles stranded on the beach have eaten plastic bags or other trash,” Dr Kongkiat said.

Climate change is also playing a role in the demise of the leatherback.

“Last year we saw just a quarter of the usual nesting statistics, and that was because it was very warm. Sea turtles prefer to lay eggs in temperatures of about 29 to 30 degrees in the sand… last year it was an average of 32 degrees under water,” Dr Kongkiat explains.

PMBC efforts to raise leatherbacks have proven problematic as the species does not do well in captivity.

“The best thing for us to do is to take care of nature. We cannot save the sea turtle by itself; we have to save its habitat as well – like sea grass beds and coral reefs.