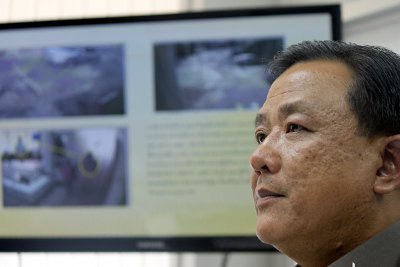 PHUKET: The Turkish national who was arrested in connection with the 30-million-baht gem and jewelry heist in Phuket on Monday will face drug possession charges before being handed over to the Phuket Police to face charges related to the gem heist.

Phuket Provincial Police Commander Chonasit Wattanavrangkul told the Phuket Gazette that Riza Balkan, 49, was found in possession of ya ice (crystal methamphetamine) when searched by Trang Police on Monday.

“Riza Balkan needs to be held in Trang for his drug case first before being transferred to Phuket to face charges related to the jewelry theft,” Maj Gen Chonasit said.

“We’re not sure when Mr Balkan will be sent to Phuket. It depends on how long his case takes to process in Trang,” he added.

Mr Balkan was arrested by Highway Police along with three other foreigners after the car they were travelling in failed to stop at a checkpoint.

Of the other three foreigners arrested in the gem heist case, Mexican national Ruben Gonzalez and Malaysian national Roslina Abu Bakar are being held by Phuket City Police.

Phuket lifeguards likely back on duty “by Monday’