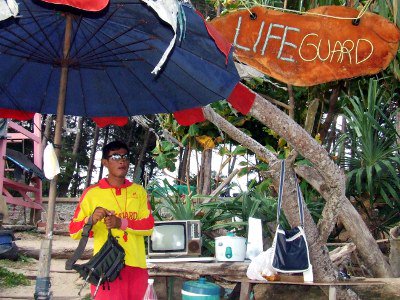 PHUKET: The Phuket Lifeguard Club has submitted an offer to restore lifeguard services at Phuket’s key tourist beaches, an offer that is likely to be agreed to by Monday, the Phuket Gazette has learned.

The news comes after two rounds of offers by the Phuket Provincial Administration Organization (OrBorJor) to receive applications to provide the services.

Both rounds failed to elicit a single application by any organization willing to put lifeguard on Phuket’s beaches.

However, Kanyarat Senrung, an officer at the Phuket OrBorJor Tourism Department, told the Gazette, “The new contract to provide lifeguard services is now being considered by the OrBorJor council. It was submitted [on Monday] by the Phuket Lifeguard Club – the same company that provided the services before.

“I believe the decision will be made by the end of the week,” Ms Kanyarat added.

Phuket Lifeguard Club President Prathaiyut “Nut” Chuayuan told the Gazette that his organization was reluctant to return to duty, but felt obliged to make sure Phuket swimmers were offered some protection from the dangerous surf at this time of year.

“I agreed to sign the new contract with the OrBorJor because nobody else wants to do it. This is hard work with no profit,” he said.

“Since the previous contract ended on April 2, many people have kept calling me and some of my foreign friends have asked me to go back on duty.

“Even though I talked to the OrBorJor about raising the salaries for my staff, the budget for the new contract will be the same as last year – nothing has changed,” Mr Prathaiyut said.

“Normally a company is supposed to raise staff salaries each year. This helps motivate the staff. It at least cheers them up. With this budget we cannot take as good of care of our staff as we want to.

Mr Prathaiyut said the earliest his lifeguards could return to patrol the beaches was Monday.

“We need to get some more equipment and do a little more staff training. We have more than 100 people in the company. If they needed us to start this week, I do not think we would be ready,” he explained.