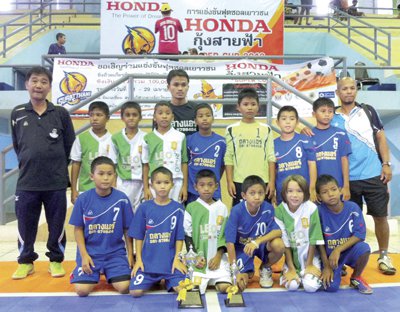 PHUKET: Youth futsal teams comprised of boys from Bang Jo and Cherng Talay on the North of the Phuket came in second and forth place at the Honda Super Cup Futsal Championship recently.

The teams qualified for the tournament after winning at Nai Yang, Patong and Kathu. Bang Jo United’s ‘Under 11 years old’ (u11) Team A was awarded a purse of 20,000 baht for 2nd place and Team B was awarded 5,000 baht for their 4th place finish.

“It was a really great experience for all the kids to have this chance to compete at such a high level in a professional futsal arena,” said Bobby Duchowny, Micah’s father. Bang Jo United’s U11 A team were last year’s regional champs.

Player Faad Thaksin said, “It [The Honda Super Cup] was more difficult than most that we’ve played in but really a lot of fun.”

Since competing in The Honda Cup, Bang Jo United (u11) has gone on to further success as the A and B teams played each other in the finals of the Wing 7 Air Force Base Tournament in Surat Thani. Bang Jo United brought home first and second place trophies at the tournament, playing seven aside football, with Team A beating Team B (4-2) in the finals.

Coach Don Thaksin evaluated his team’s performance this season, “After all of the kids hard work for the past two years it’s great to see that Bang Jo is having so much success. They love representing Phuket in tournaments and in other provinces.”

“With the recent wins Bang Jo has been invited to play in larger tournaments in Bangkok and Chiang Mai. League play doesn’t begin again for another two months.”