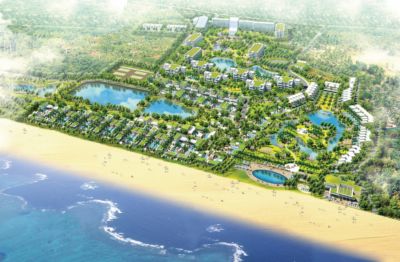 West Sands Resort is to be developed in two phases and will comprise a luxury 400-room, full-service hotel along with 98 villas and 336 condominiums, as well as standalone restaurants and the island’s first water park.

Darren Edmonstone, Vice-President of Acquisition and Development for Outrigger Enterprises, told the Gazette that the project is the first of several resort developments planned for the region. A regional support office at Plaza del Mare in Cherng Talay will be fully operational by mid-March.

“We see Asia as the real growth area for Outrigger. I think a lot of people are looking for a unique leisure and lifestyle solution, which we have the experience and know-how to offer. As a resort development and management specialist with 60 years’ experience in the industry, the Outrigger brand is suited to this region and we are able to offer something different,” said Mr Edmonstone.

“The West Sands project is currently our largest development in the region and it is a prime example of all the disciplines Outrigger brings to this kind of resort. It will be a great showcase for future Outrigger developments,” he said.

Mr Edmonstone added that Outrigger is currently in contract negotiations for another development in the south of the island. Other plans in the region include a project on Koh Samui, two projects in Bali, plus a 500-room resort on Hainan Island, China.

West Sands will manage the sub-letting and sales of the condominiums and villas, with a quota available to foreigners as freehold.

“We have a great deal of residential management experience from similar projects in Hawaii. As Outrigger owns and manages similar properties around the world, we are sympathetic to the needs of our villa and condominium owners,” said Mr Edmonstone.

Mr Edmonstone also expressed confidence in Outrigger’s expansion into the Asia-Pacific lifestyle and leisure industry with a strong background in resort management and specially developed IT software to oversee operations.

“This is an exciting opportunity for Outrigger,” said David Carey, president and CEO of Outrigger Enterprises Group. “We’ve had our sights set on Thailand – Phuket in particular – for some time now.

“West Sands is Outrigger’s first venture into Thailand, but it certainly won’t be our only venture. We’re looking forward to gaining a significant presence in Asia over the next few years.” added Mr Carey.

“We’re pleased to have Outrigger as the manager of the hotel at West Sands and look forward to a successful project backed by Outrigger’s exemplary reputation and expertise, global strategy, cutting-edge technology and proven customer service,” he added.