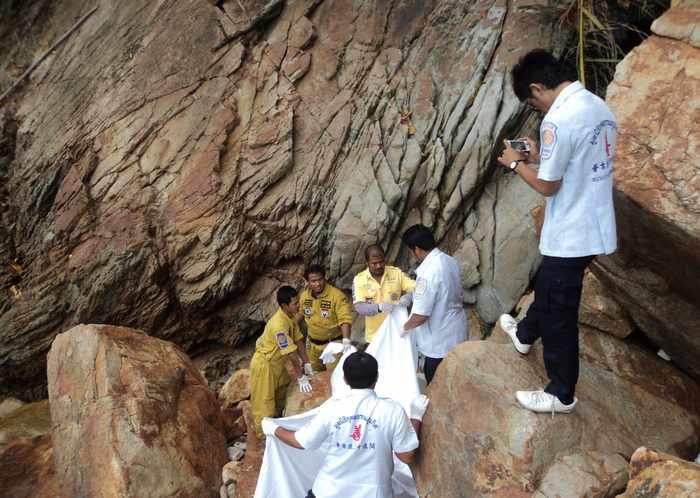 PHUKET: One fruit harvester was injured and another killed yesterday in separate accidents on northern Phuket.

At about 4:30pm, a Myanmar national named only as Maen fell from a tree to his death at a west coast resort while harvesting coconuts.

The tree was situated on the edge of a cliff, and Mr Maen, 32, fell 30 meters before striking his head on the rocks below, said Lt Thanapop Rattanaburi of Cherng Talay Police.

Mr Maen’s wife and brother-in-law, who had been hired by the hotel along with Mr Maen to pick the coconuts, had been helping him with the harvesting.

While her husband was up in the tree, Ms Lan was stung by a wasp and went to the hotel for first aid.

“Ms Lan thinks Mr Maen may have been stung by a wasp too, which caused him to fall,” said Lt Thanapop.

“She believes it was an accident, so we are not investigating further.”

Mr Maen’s body was recovered from the rocks by Kusoldharm Foundation rescue workers, and taken to Vachira Phuket Hospital.

Two hours earlier, another fruit harvester was injured on his way to work.

Ekkachai Chuwong, 27, and his cousin, Daeng Chuwong, 28, were riding separate motorbikes on a dirt path up a hill at Bang Niew Dam Reservoir in Srisoonthorn.

“We were on our way to get some durians at the top of the hill,” said Mr Daeng.

Suddenly, Mr Ekkachai went off the road and down the slope, landing with his motorbike on top of him.

“I didn’t know what to do to help him, so I rode back down the hill as fast as I could to get help,” said Mr Daeng.

Kusoldharm rescue workers carried Mr Ekkachai down the mountain on a stretcher and took him to Thalang Hospital, where he was treated for back and chest injuries.

Pinot plays down Bardet rivalry ahead of Pyrenees