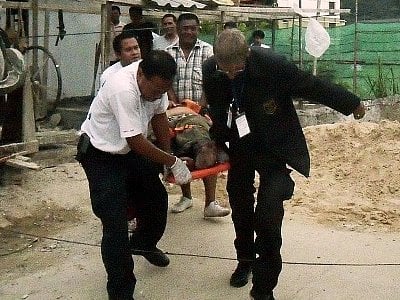 PHUKET: Two men reportedly known to police as thugs who impersonated police officers to extort money from Burmese workers were gunned down in a street shootout in Phuket’s tourist area of Kata Beach today.

One police officer was shot in each leg before returning fire.

Registered as residents of Cherng Talay, both were wanted as suspects for motorcycle theft, he said.

They were also wanted for impersonating police officers and extorting money from Burmese workers at a camp near Nai Harn Lake, he said.

It was reports of their physical description from these incidents that earned them the nicknames “Fat” and “Thin”.

Ignoring the officers’ order to stop, the duo sped off toward Kata, leaving the officers with little choice but to radio ahead for police in the Kata-Karon area to watch for them.

Sgt Maj Hattaporn Thongkhaobua of Chalong Police was next to spot the pair, ordering Adisorn to stop the motorbike near the Alpina Nalina Resort on Khet Kwan Road.

The pair replied by opening fire on Maj Hattaporn, shooting him in the legs.

Maj Hattaporn returned fire, hitting Somkid in the back.

Adisorn then turned the motorbike into Soi Kerdsub where the pair abandoned it and ran into a hotel under construction.

Trapped, the pair started a shootout with police who quickly arrived in support.

After the smoke had cleared, Adisorn was lying dead in the doorway with a .38 revolver on the ground near an outstretched hand.

He also had a knife sheathed on his waist, several amulets and about 35 bullets in a black backpack.

Inside, Somkid was seriously wounded. He had been shot several times in the leg, chest and stomach.

“Fat and Thin were wanted criminals and well known among other gangsters. They always impersonated police officers and went to many alien worker camps all over Phuket to demand money,” he said.

Lt Col Boonlert added that Somkid had been charged with resisting arrest, illegal possession of a firearm and impersonating a police officer.

He did not elaborate on whether any further charges would be filed against him.