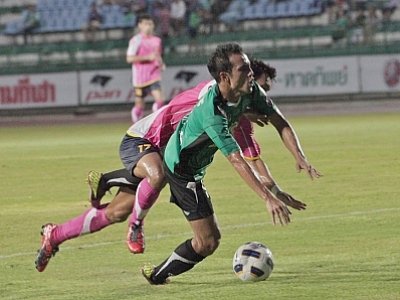 FC Phuket opened the scoring on 26 minutes with a goal by Niran Panthong, but Chainat equalized just before the break to a goal that drew the vociferous ire of the FC Phuket supporters, (aka “The Hulk”), who booed the officials off the field at halftime after a flagrant foul by a Chainat attacker, deep in the FC Phuket end, was ignored, setting up the equalizer seconds later.

The “Southern Sea Kirin” (a ‘nickname’ for FC Phuket) displayed their prowess in the wet by netting three unanswered goals in the second half, however.

The Hornbills were a man down following a red card shown to Tongchai Malaithong on 73 minutes when FC Phuket’s Brazilian import Paulo Renato scored their fourth goal six minutes later.

The win sets up a vital encounter on June 25 with Songkhla FC, who enjoy the highest fan support of any team in Division One based on attendance records — regularly attracting crowds of 10,000 and upward to their home pitch in Songkhla Town.

FC Phuket still sits at 9th, with 23 points from 16 games, while Songkhla FC are in 4th with 32 points from the same number of matches played.

The Songkhla match is a rescheduled fixture as a result of flooding which resulted in postponement of the original date.

Coming off a 5-1 thrashing of Samut Songkran, the Songkhla FC “Lakers” are expected to arrive in with many busloads full of supporters who will likely be joined by some of the tens of thousands of Songkhla natives who live and work in Phuket.

In fact, some families in Phuket are torn down the middle on who to support in the match.

A record attendance is expected for the match at Surakul Stadium, which has a capacity of 15,000.

Results of other Division 1 matches played over the weekend:

One dead, two injured in Phuket shootout with police