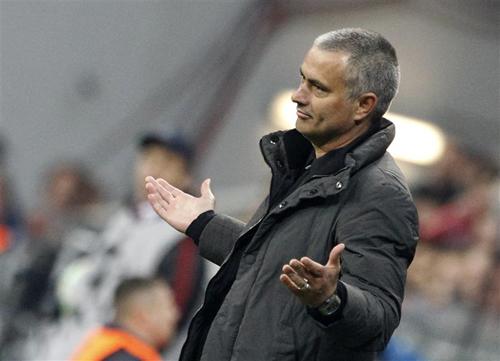 PHUKET: Real Madrid manager José Mourinho ran the rule over Manchester United yesterday before declaring that Wednesday’s Champions League clash between the sides was “the match the world is waiting for”.

The plot-lines are rich and Mourinho, who once famously danced a jig of joy along the Old Trafford touchline when his Porto side got the better of United, seemed genuinely excited to be part of the showpiece occasion.

“We have to feel very privileged to play this match,” Mourinho, who sat in the directors’ box as United opened up a 12-point lead in the Premier League with victory over Everton, told MUTV.

“People think we’re under pressure because one of the big teams will soon be out of the biggest competition.

“But Real Madrid and Manchester United staff, as well as the players, feel privileged. It’s the kind of match you want to play and we have to prepare as best we can.

“It’s such a big match,” added the Portuguese. “Everybody wants to play. Nobody will be tired. It’s a match the world is waiting for. They are not waiting for other matches in the Champions League. So I hope we can give the world of football what they’re waiting for.”

Ferguson has rarely got the better of Mourinho, winning just two of the matches when they have sat in opposing dugouts, but clearly has plenty of time for the former Chelsea manager.

“I had a chat with Jose before the game, he was in good form,” Ferguson said. “We’re both looking forward to the game on Wednesday. It’ll be terrific.”

PHUKET: With 12 English league titles and 929 appearances for Manchester United under his belt, Ryan Giggs knows a thing or two about what is required in the closing stages of a season.

That explained the 39-year-old’s steely calm after helping his side open up a 12-point gap over Manchester City in the Premier League yesterday with a 2-0 home win over Everton.

The evergreen 39-year-old Welshman’s goal meant he has now scored in each of the 21 seasons since the Premier League began and such was his contribution that there seems no reason why he will not play into his fifth decade.

First, however, there is United’s 20th title to clinch and after watching City steal it in the final seconds of last season, there is an extra determination to make sure the crown is returned to the Old Trafford trophy cabinet.

United have won 12 of their last 14 games in the Premier League, drawing the other two, and they look unstoppable.

“We’ve been in really good form and we’ve got players on the bench or not even getting on the bench who would walk into any other team,” Giggs told Sky Sports.

“The squad we’ve got at the moment is really strong and we’ve got to keep that up until the end of the season.

“We’ve got enough experience in the squad but you never take anything for granted. We’ve just got to keep playing well.

“The strength of the squad should see us there if everyone stays fit. But you never know what happens. You’ve just got to concentrate and do our job.”

PHUKET: Nigeria ended a 19-year wait to regain the African Nations Cup after a stunning goal from winger Sunday Mba gave them a deserved 1-0 win over Burkina Faso in the final at Soccer City.

The 24-year-old, who also scored the winner in the 2-1 quarter-final win over Ivory Coast, struck after 40 minutes when the ball bounced off a defender and into his path as he advanced on goal.

Mba flicked it over defender Mohamed Koffi then reacted quickest to score with his other foot low into the corner of goalkeeper Daouda Diakite’s net for a contender for goal of the tournament.

Underdogs Burkina Faso, in the final for the first time, seemed over-awed by the occasion, which was played out in front of a near 90,000 capacity crowd, until the last 20 minutes when they threw everything forward in search of an equaliser.

But Nigeria with John Obi Mikel superb in midfield and Efe Ambrose, Kenneth Omeruo and Elderson Echiejile dominant at the back always held the upper hand.

The victory meant Nigerian coach Stephen Keshi became only the second man to win the tournament as player and coach. It was a third African title for Nigeria and their first since Keshi captained them to victory in 1994.

Blatter said he was surprised that UEFA, headed by Michel Platini who is a possible rival for the FIFA presidency in two years’ time, had declared itself against key proposals from FIFA’s reform working party the Independent Governance Committee (IGC).

UEFA, in a declaration last month, rejected a proposal to limit FIFA executive committee members to two four-year mandates and called for the FIFA president to serve a maximum of 12 years instead of the eight put forward by the IGC.

Blatter, who was in South Africa for the African Nations Cup final, said it was UEFA’s job to consult their national associations, not to issue their own declaration on the proposals.

“The reform process is on the way to conclusion,” he told a media round-table meeting. “Two parts have been implemented by Congress: the establishment of an independent ethics committee and the fact Congress and not the executive committee will choose future World Cup hosts.

“Now there are 10 or 11 other points that have to be dealt with by the next FIFA Congress in Mauritius in May. So I’m surprised by the reaction of UEFA, because the executive committee told the confederations they should consult their national associations about the reforms and what they think about the last part of the amendments to the statutes.

“And I’m surprised because it did not seem like a consultation, it seemed like was decision-making from UEFA where the national associations have signed a declaration against this.

“The idea was that at the FIFA Congress, all national associations have the right to speak on the amendments in favour or against. We have asked the confederations to make consultations, we have not asked them to make decisions.

“If all the Confederations make decisions, what is the point of the FIFA Congress?”

Blatter was also angry that UEFA appeared to take a stand against security checks FIFA wants to introduce for anyone being elected to the executive committee, following a series of high-profile scandals involving FIFA officials.

“What is important to me, and I will defend it, is that all members of FIFA shall have a scrutiny check, because everyone working somewhere has one. All the referees and linesmen on the FIFA list have to have one and sign a document which is recognised by their national association.

“So if it is good enough for FIFA r