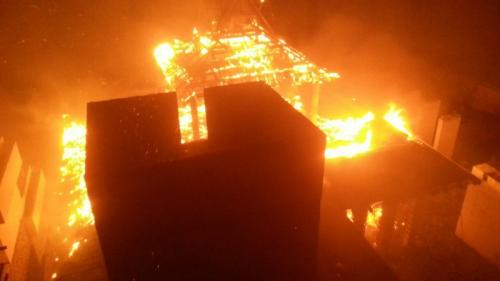 PHUKET: Police suspect the fire that engulfed an abandoned luxury hotel near Nai Yang Beach in northern Phuket early this morning was started by thieves searching for copper wire.

“The hotel, on the border of the Sirinath Marine National Park, was completely abandoned. Thieves most likely went onto the premises to salvage copper. We suspect they were attempting to burn the copper free from the insulated wiring, and the fire just got out of control,” Lt Col Prakob Boonkwan of Tah Chai Chai police said.

The cost of the damage has yet to be determined, but the six-storey building and land were probably worth about one billion baht, said Col Prakob.

However, construction at the site was ordered to stop when an investigation revealed that it might be encroaching on Sirinath Marine National Park.

The investigation was carried out by the then-Director-General of the Department of National Parks, Wildlife and Conservation Damrong Phidet (story here).

Police found three sidecars in front of the hotel. “We asked around, and nobody claimed them, so we collected them as evidence,” he said.

“We suspect the enormous fire was accidentally caused by thieves, rather than arson, as thieves had already been caught trying to steal toilets from the facilities,” Col Prakob said.

“However, we will continue our investigation into the cause of the fire,” Col Prakob added.