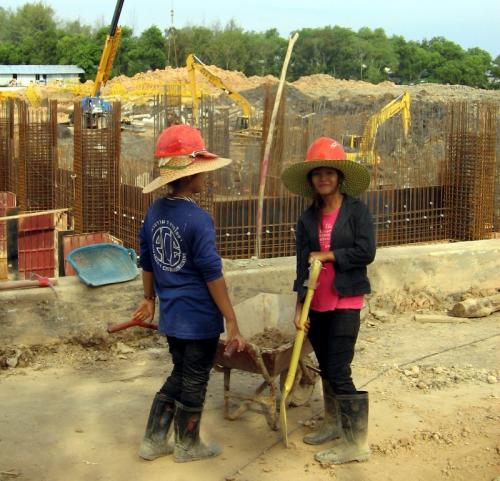 BANGKOK: Myanmar has urged Thailand to speed up registration of its citizens working in the Kingdom, with nearly one million workers and hundreds of thousands of their children still undocumented as the deadline draws near.

Thailand, together with the Myanmar authorities, is in the process of collecting documents to verify the workers’ nationality.

The original nationality-verification deadline for migrant workers expired last year, but the Cabinet extended the date, allowing them to submit documentation by March 16.

Thailand set up one-stop service centers in major cities throughout the country to facilitate the process. Myanmar has dispatched officials to 11 of the centers, Myint Thein told a press conference.

Some 1.2 million migrant workers from Myanmar have been registered so far. Myint Thein estimated that 1 million more have no documents.

The nationality-verification centers have the capacity to provide service to 500 to 1,000 migrant workers per day.

Myanmar wants Thai authorities to issue special entry visas for children who accompany or depend on parents working in Thailand. Officials say issuing such a visa for children could take weeks.

“We would like children who are dependent on parents working in Thailand to have documentation so that authorities can provide protection and social welfare for them,” Myint Thein said.

It is estimated that migrant workers in Thailand are accompanied by some 200,000 children, he said, noting that half of them are of school age.

“We want them to be able to continue their education. If they have documents, they will have a chance to be educated,” he said.

The Myanmar minister said the expense of obtaining documentation in Thailand was too high for Myanmar migrant workers. Many of them have to pay as much as 15,000 baht, according to Myanmar Ambassador to Thailand, Tin Win.

Migrant workers have to pay 1,800 or 3,600 baht for a one-year or two-year work permit, respectively, according to the Department of Employment.

“This process is not expensive for the workers and many of them have to pay private brokers,” he said. “We don’t know how private brokers intervene in the process and take such a large amount of money from the workers,” Tin Win said.

The ambassador urged the Thai authorities to monitor the process and find a solution to reduce workers’ expenses.