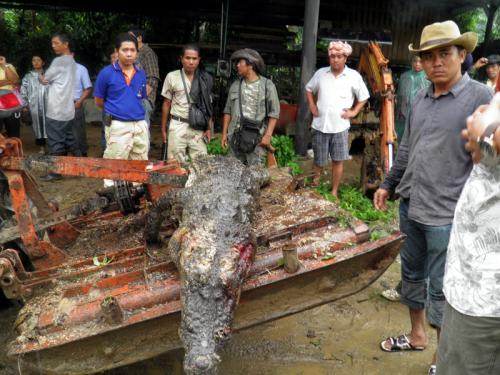 PHUKET: Officials put down a fierce two-and-a-half meter long crocodile after it and another croc escaped from a crocodile farm in Phang Nga today.

“We rushed to the farm owned by Panet Saelim, 48, and were able to quickly find the pair of crocs in the irrigation ditch of a palm plantation not far from the farm,” said Mr Somkiat.

“The ditch leads to a mangrove forest…we were concerned that the crocs would swim out to sea,” he said.

The team was able to catch the smaller of the two crocs, which was about 1.2 meters long and about 3 years old.

“The other one was very fierce, so we decided to shoot it to prevent it from attacking people,” Mr Somkiat said. “That croc was about seven years old and over two-and-a-half meters long.”

The heavy rain yesterday caused the water levels in the crocodile pond to rise, enabling the crocodiles to escape, explained Mr Panet.

After an inspection determined that Mr Panet’s pond was not up to specifications, he was told to move his remaining 11 crocodiles somewhere else to prevent a repeat of today’s drama, said Mr Somkiat.

PSS to put Phuket on the map