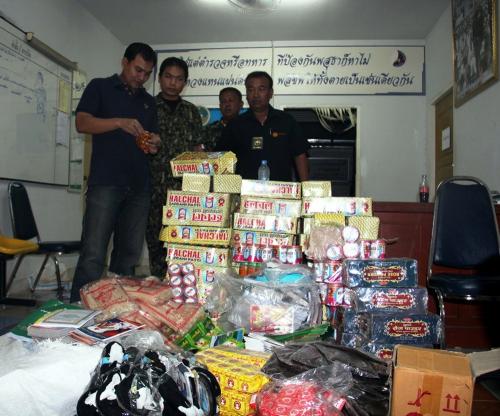 The find was made during a search conducted as part of an anti-drug drive.

“We found the plastic bags dropped off at a platform at Phuket Bus Terminal 2, and when we opened them we found a lot of products originating from Myanmar, such as: men’s slippers, books, tobacco, noodles and other products that we believe import tax had not been paid on,” Mr Suthee said.

When nobody claimed ownership of the bags they were taken to Phuket City District Office.

“We will send a report to the Phuket Customs Office,” Mr Suthee said.

A Burmese translator explained to police that based on the script written on the bags the products were likely imported to be sold to Burmese workers in Phuket.

“If the owner of the goods can prove that these goods were legally imported, and the correct amount of import tax had already been paid, they will have the right to recover the goods,” Mr Suthee said.

The Phuket Customs Office will keep the goods for 30 days. If nobody turns up to claim ownership, they will be sold by the office after a public announcement has been made.