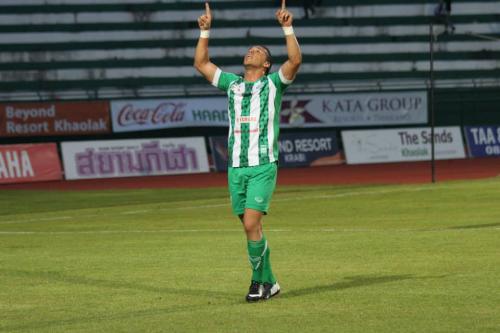 PHUKET: The Islanders once again allowed an early lead to slip away and be forced to settle with yet another draw – their 13th of the season – this time against 2nd placed, Air Force AVA FC (formerly known as Airforce United) in a high-stakes match last night at Phuket’s Surakul Stadium.

A beautiful header by Luiz “Dudu” Purcino 10 minutes into play, capitalizing on a perfectly placed cross from Ekartit Somjit, had some 3,140 fans instantly energized, with the exception of the few dozen of the visitors’ marching-band contingent of supporters, whose rhythmic drums were laid down, but only for a short while.

Minutes before the end of the second half, the Blue Eagles’ Rangsan Ruphmo scored the equalizer, which would prove to be the final goal of the match, followed by an uneventful second half.

Named man-of-the-match, Phuket’s Dudu was less than thrilled after the match, telling the Gazette: “It’s very frustrating. We’ve made the same mistakes many times this season, letting our lead go… As for my goal, it was just how we’ve practiced many times in training.”

Having scored his 7th of the season, Dudu is still Phuket’s top scorer.

The single point was enough to bump Phuket back into 6th place, giving them a single point advantage over 7th placed Saraburi, who lost 3-2 away last night to Bangkok FC.

As a result the Bangkok “Iron Bulls” are now joint-third with Singtharua FC, who also won last night at home, 2-0 over Khon Kaen.

Both Singtharua and Bangkok are “tooth-and-nail” for the final promotion spot with 43 points – nine more than Phuket, with only 10 more matches in the season to “settle the score”.

Indeed, any remaining path to promotion will surely be an uphill battle for Phuket, who next take on the Singtharua “Port Lions” in an away match this Sunday.

Kickoff, at Bangkok’s PAT Stadium, in the urban district of Klong Toei, will be at 6pm.

The match will be broadcast live on True Visions, cable channel 116, starting from 6pm.

Following are all YL1 results from last night:


And all YL1 fixtures this weekend