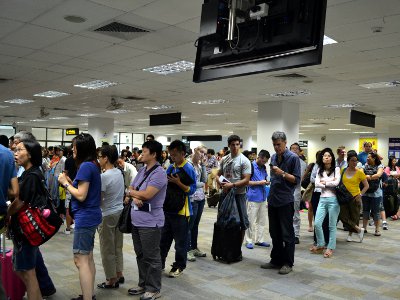 PHUKET: Tourists waiting up to an hour and a half to clear immigration during peak periods at Phuket Airport are unlikely to receive any reprieve until a separate international terminal is completed.

Pol Maj Wannee Songsanguan of Phuket Airport Immigration told the Gazette that her office was well aware of the situation, but could do nothing more to speed up processing times.

“During peak periods we already have Immigration officers at all 18 counters in the arrival hall,” she said.

‘The problem occurs when many flights land at about the same time. Since the high season began, the largest number of tourists we have had to process all together has been about 900. Although it is overcrowded, it is manageable,” she added.

“We know in advance how many people will arrive, so we arrange to have a full staff working the counters during peak periods,” she said.

“There is nothing more we can do. We have limited space. We have officers on duty at every single counter. All we can do for now is wait for the airport to provide us with more space. Then we can arrange more officers and cut down on waiting times,” Maj Wannee added.

Meanwhile, Phuket Governor Tri Augkaradacha told the Gazette that construction of a new international terminal at the airport, scheduled to begin in March, will result in a larger arrivals hall and give Immigration more space for additional counters.

“Overall, this megaproject [the entire expansion project at the airport] will cost 56 billion baht. The project will take approximately three years to complete,” said Governor Tri.

The airport currently has one main terminal, with departures on the second floor and arrivals on the first. Each floor has two lounges, one each for domestic and international passengers.

Phuket’s annual ‘Best of Phuket’ Awards to be unveiled tomorrow