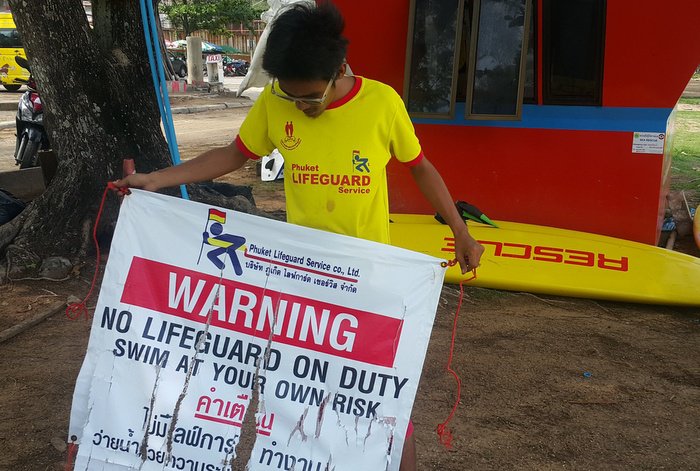 PHUKET: There is no solution in sight for the Phuket lifeguard contract conundrum, which leaves the island’s beaches without essential life-saving services as the annual southwest monsoon season stirs up dangerous seas on the west coast, confirmed officials to the Phuket Gazette yesterday.

However, the president of the Phuket Lifeguard Club (PLC) proposed two solutions.

“One option would be for the Phuket Provincial Administrative Organization [PPAO] to create a long-term contract for us. However, we understand that this isn’t really possible, because they are given the budget annually,” said PLC President Prathaiyut Chuayuan.

“The other option would be for them to stop requiring the 5-per-cent deposit. Each year we are required to deposit 5 per cent of the concession.”

Mr Prathaiyut pointed out that the PLC didn’t have the capital to make the deposit until the contract had expired and last year’s deposit was returned to the company.

Though neither solution tabled by Mr Prathaiyut looks like it will become reality by next year, officials are searching for another solution.

“It’s about the renewal process, budget and management – it will take time to solve,” Watcharin Pathomwatanapong, chief administrator (palad) for the PPAO told Gazette yesterday. “However, the PPAO is trying to find a solution and will be talking to the governor about the problem.”

With lifeguards back on the beaches yesterday, after nearly two months of being off-duty, the PPAO has 10 months to make a change.

“I understand that Phuket is a popular tourist destination because of its beaches, and that it damages our reputation when there are periods of time when there aren’t any lifeguards on duty,” Mr Watcharin said. “However, we need orders from top government officials to change the current system.”

The bidding for the new contract was opened up almost six months prior to the contract ending. However, with only the PLC showing any interest and their ‘hands being tied’ when it comes to providing the deposit, no progress is made, explained Mr Watcharin.

“We don’t have enough officers trained in basic water rescue skills to protect the beaches when the lifeguards leave,” Mr Watcharin said. “So we are trying to talk with hotel operators near key tourist beaches about whether or not they would be able to help us by providing lifeguards. It is also possible that the local tambon administration organization (OrBorTor) or municipality could help.”

Phuket Governor Nisit Jansomwong told the Gazette yesterday that he supported the PPAO taking pro-active steps toward ensuring that the island’s beaches remained guarded year round.

“We will meet and talk with representatives of the PPAO and see what solutions we can develop,” Governor Nisit said. “We will do our best to make tourists feel confident in their safety while visiting Phuket.”