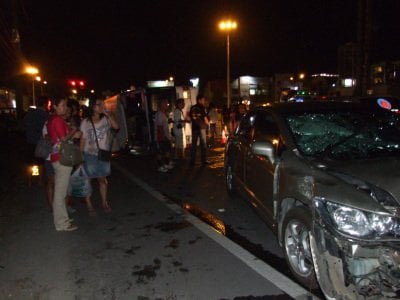 At the scene, police found the overturned bus. Nearby was a sedan with a smashed front end and a banged-up pickup truck crashed into a concrete power pole.

Lt Teerawat told the Phuket Gazette that the driver of the bus was approaching the crossroads from the north and was unable to stop the vehicle in time to avoid hitting vehicles waiting at the intersection.

To avoid a collision, the driver attempted a split-second left turn onto Yaowarat Road. The bus’ speed, however, was too great as the bus went over the left-turn traffic island, collided with the pickup and sedan in the oncoming lane and overturned, police said.

The driver of the pickup, Wichai Leelaswattanakul, said that he was heading home to Thalang at the time of the accident.

He was on Yaowarat Road waiting to turn right onto the bypass road when the bus came over the traffic island, he said.

“The bus, traveling at such a high speed, couldn’t make the turn,” Mr Wichai said.

“It smashed into the side of my pickup and then head-on into the car behind me.

The force of the impact sent Mr Wichai’s pickup skidding across the road into the power pole, where it came to a rest, he said. He suffered an injury to his head in the collision.

Police were unable to locate the bus driver at the scene of the accident.

However, the guide leading the tour and Pramual Jitjaipakdee, of bus tour company Vista Holiday, today both confirmed that the driver is currently in hospital being treated for injuries sustained in the accident.

They will bring him to the police station after he is released, they said.

Mr Wichai told the police that immediately after the accident, the bus driver was helpful in removing passengers from the wreck.

Five of the Chinese tourists were injured, one with a broken arm and four others with cuts. None of the injuries were reported to be serious, said police.

Seven of the injured were taken for hospital treatment – some to Bangkok Hospital Phuket and others to Phuket International Hospital.

One bus passenger told the Phuket Gazette that the tour group had just returned to Phuket from Phang Nga province. He said they were on the way to their accommodation in Phuket Town at the time of the accident.

The “crossroads” has seen its fair share of fatal accidents, the most recent of which was in September last year when a 22-wheeled tractor-trailer rig allegedly ran a red light and crashed into two motorbikes, killing a young girl wearing a secondary school uniform.

Many will recall the accident at the crossroads in 2007 when a Kusoldharm Rescue Foundation pickup truck collided with a Toyota sedan while transporting victims from another traffic accident to Vachira Phuket hospital. One Kusoldharm rescue volunteer and a patient were killed in the crash.

Phuket water woes in the spotlight