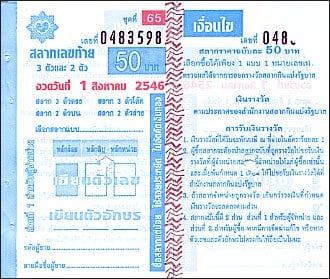 PHUKET TOWN: Lottery agents were given registration details today in preparation for the new government lottery that will begin August 1 and which is aimed at subverting the popular underground lottery in which punters choose just three numbers. Each of 100 lottery agents in Phuket may have up to 50 lottery salespeople, and agencies and dealers will have to provide registration details to police. Pol Lt Col Paween Pongsirin, Superintendent of the Phuket Town Police Station, told a meeting of agents at Royal Phuket City Hotel today that agents and dealers based in Phuket Town could register immediately at Phuket Town Police Station, while those based in Patong could register at Kathu Police Station from tomorrow. “They must bring the original and three copies of their house registration certificate [tabien baan], the original and three copies of their ID card, four photographs and evidence that they are lottery agents – that includes the documents of their dealers,” he said. Copies of the documents will go to the police, the Post Office (where the agents will purchase tickets), and the Government Lottery Office. The new process is expected to make it clear to customers that they are buying a lottery ticket from a government-approved dealer or agency. Punters will fill in their “winning” three-digit number on both halves of the lottery ticket, which will then be cut in two, with the buyer and the seller each keeping half. Each half also has printed on it a unique number for the ticket.