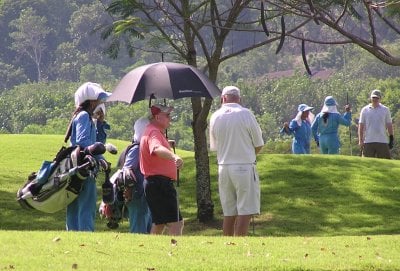 THALANG: Yongyos Palanitisena has announced that a four-man committee comprising himself, Chaichana Ratanatraiwirat, Wisut Srisangkaew and Nuntaporn Asumpinapong will oversee the running of Blue Canyon Country Club (BCCC) in place of the full board of Murex, the company that owns the BCCC.

Yongyos made the announcement following an October 29 meeting, at The Metropole hotel, attended by seven newly-appointed members and one long-term member.

He had been chosen as chairman, he said.

Formation of the new management committee follows an order issued by the Phuket Provincial Court to install seven new members to the board of directors of Murex, bringing the total number to 12.

The court ruled that a quorum of any six of the 12 members can have decision-making power, and ordered that every two months any BCCC income after expenses be deposited into a Murex account. The bankbook would be kept at the court, which must first approve any withdrawals.

The orders, issued October 19, were announced at the Phuket Reporters Club on October 25 by Chart Chindapol, who said that he was representing the Chindapol clan. Chart is a relative of the chief plaintiff in the case, Rewat Chindapol.

The search warrant was issued October 25 by the Criminal Court in Bangkok, allowing Col Supachai to remove documents from the building for investigation.

Throughout all the legal wrangling, the BCCC golf course has remained open for play.

Valentino and wife released on bail