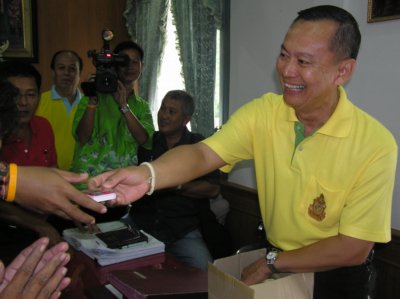 Cabinet approved the promotion as part of a bureaucratic reshuffle of 60 Ministry of Interior officials.

Governor Niran, 52, has been Phuket Vice-Governor for the past five years, moving to the province after tenure as Director of the Foreign Affairs Division of the Office of the Permanent Secretary for the Interior.

Explaining his vision – and concerns – Governor Niran told the Gazette that Phuket has many economic, social and environmental problems that need to be urgently addressed.

“I cannot fix these problems alone. All other departments – and staff within them – as well as the palad and the private sector must cooperate to succeed; we have, after all, a shared responsibility,” he said.

He continued by saying that tourism will remain as the basis of the island’s economy.

“The island’s main income is from tourism – 85 billion baht from 4.7 million tourists in 2004 before the tsunami – but in the two years since then, we have failed.

“We must help each other to get the tourists back again, to make them trust us again.”

Gov Niran described many traders and hoteliers as “happy” at the impending high season, adding that many hotels are full with revelers ahead of the Phuket Carnival, which begins tomorrow.

“We must impress the tourists, for if we do, then they will surely return. However, if they are exploited, perhaps by being overcharged for a service, then they will tell other people, which will harm the island’s image,” he said.

Also moved in the reshuffle was former Phuket Vice-Governor Manit Wattanasen, who was transferred to an inactive post in Bangkok.