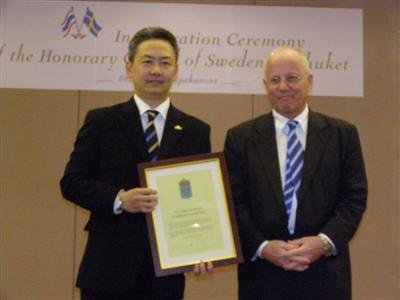 PHUKET CITY: A doctor at Bangkok Hospital Phuket is the new go-to man in times of trouble for the Andaman region’s sizable Swedish community.

The appointment ceremony was also attended by Phuket Governor Wichai Phraisa-ngop, representatives from other foreign consulates in Phuket, and members of the island’s Swedish community.

The event took place in the hospital’s King Karl Gustaf Conference Hall, which was built after more than 540 Swedes lost their lives in the 2004 Asian tsunami disaster.

Bangkok Hospital Phuket treated many of the survivors, earning praise from the Swedish government and leading the Swedish Royal Family to grant permission to name the conference room in honor of the Swedish monarch.

Dr Sompoch was a member of the hospital’s executive board at the time.

“The Swedish government was extremely grateful to us. The Swedish Red Cross even invited us to their country to lecture them on how we coped with Swedish patients at that time,” Dr Sompoch said.

Dr Sompoch served as the royal couple’s private physician for the duration of the visit.

On his appointment to the position of honorary consul, he said, “I am so proud…. My next task is to bring benefits to both Thai people and the Swedish community here.”

Dr Sompoch said he was “just an ordinary physician like other medical staff.”

He stressed how popular Phuket was with Swedes.

“Phuket is better known to the Swedish [people] than Thailand,” he said. “The total Swedish population is around 9 million, and 60% of them have visited Phuket.”

“Most of them consider Phuket to be a second [winter] home,” he added.

The island is also popular with Swedes seeking specialized treatments, including knee and eye surgery, he said.

“Then they spend at least a couple of weeks in Phuket recovering,” he said.

The previous Swedish honorary consul was Wichit Na Ranong, a Thai tourism industry pioneer and owner of the Pearl Group of hotels and resorts.

After the tsunami, the Swedish government appointed one of its own nationals to officially take charge of consular affairs in Phuket.

In mid-2008, the official position ended and Mr Wichit was again offered the honorary post. After Mr Vichit declined, the position was offered to Mr Sompoch.

The position of Honorary Consul is generally permanent, held until the appointee resigns.