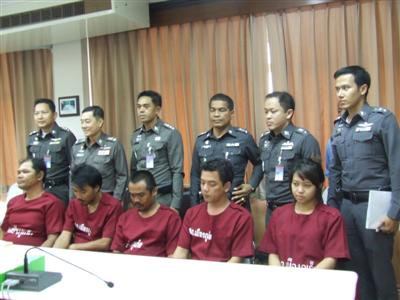 PHUKET CITY: Police are cracking down on loan sharks who offer desperate people high interest loans, sometimes backed up with the threat of violence against those who fail to pay back their debts.

Four men are accused of offering loans with interest above the legally permissible rates.

They were paraded before a press conference at Phuket City Police Station yesterday.

Phuket Provincial Police Commander Pekad Tantipong said police are also looking for another group of loan sharks who recently put a number of debtors in Vachira Phuket Hospital after they failed to meet their repayments.

All four suspect were picked up at Ban Koh Kaew police checkpoint on Monday and Tuesday.

Police identified the four as follows:

Pattanachat Kayasit, 33, from Chantaburi, arrested in possession of a list of debtors, 50 phone cards and 150 baht in cash;

Gen Pekad said the men were charging interest rates of 30 percent per month.

All four suspects confessed to charges of usury.

Back in June, Chalong Police arrested a gang of loan sharks extracting money from Rawai’s sea gypsy community. For that story click here.

Pol Maj Jaran Bangprisarit of Chalong Police said at the time that he believed there were an estimated 40 loan shark gangs operating in Phuket.

Advertisements for loan services are a common sight in Phuket, where they are commonly pasted onto telephone booths and utility poles.