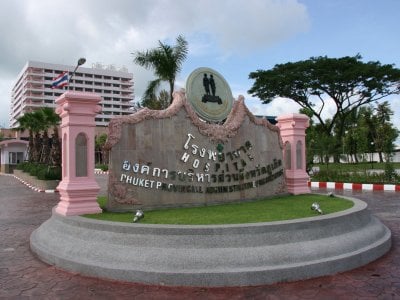 The PPAO is still waiting for the Office of the Attorney General (OAG) in Bangkok to approve a contract to hire medical staff. Contracts have been sent to the OAG several times starting in December last year. Each time the OAG has sent back the drafts with requests for revisions, so the approval process is not yet complete, he said.

“The hospital is 90% complete. The only hold-up is with the staff and medical equipment. Once staff are hired they can decide what equipment they need,” Mr Paiboon said.

“I have tried very hard to have the hospital open as soon as possible, and it looks like it will open by early next year,” he said.

The hospital, on Sri Sena Road in Phuket Town, was originally built as part of the Phyathai Hospital chain under its former major stockholder Dr Arthit Ourairat, who still operates British International School in Phuket.

However, the building sat abandoned for seven years after it went bankrupt in 2000. The PPAO bought the building from the Thai Asset Management Corporation for 327 million baht in 2007.

The 10-story hospital will house 217 beds, with specialist facilities including a specialist kidney dialysis center with an admittance capacity of 80 patients per day.