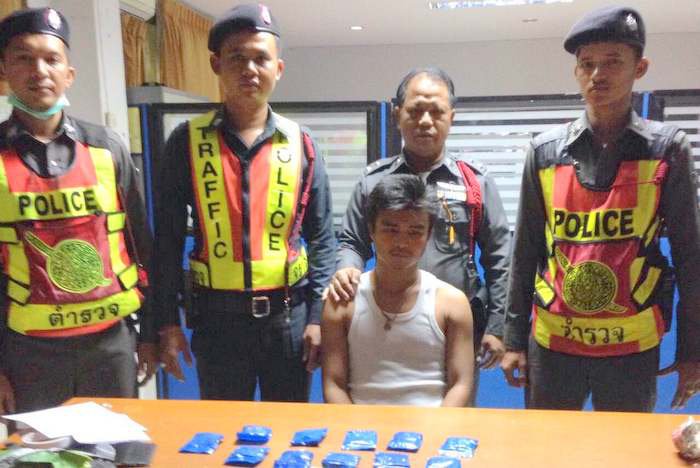 PHUKET: A Myanmar national was arrested on a Hat Yai-Phuket minibus in possession of 2,178 pills of ya bah (methamphetamine) early this morning.

The 30-year-old man, who police named as Kyaw Soe Miw, was nabbed after Tah Chat Chai Police set up a checkpoint at about 4:15am today to screen passengers coming to Phuket from other provinces.

“We suspected that some illegal material was hidden in the minibus. So when the bus arrived we asked the driver to stop on the left side of the road so we could search it,” said Tah Chat Chai Police Deputy Superintendent Nikorn Chuthong.

“During the search, Mr Kyaw looked suspicious so we searched his body but found nothing on him. However, when we checked his bag we found the ya bah hidden inside.”

The pills were separated into 11 packets and stored in a plastic bag inside a bottle.

Mr Kyaw told police that he received the pills from a fellow Myanmar national, named only as Chauy, who hired him to deliver it for 15,000 baht. His duty was to carry the bag to Phuket and drop it off in front of the Supercheap store in Phuket Town.

Mr Kyaw was taken to Tah Chat Chai Police Station and charged with possession of a Category 1 drug with intent to sell.

“We don’t have very much information about Mr Chauy. We will contact police in Hat Yai to see if they know anything about him,” said Maj Santi Prakobpran of the Tah Chat Chai Police.