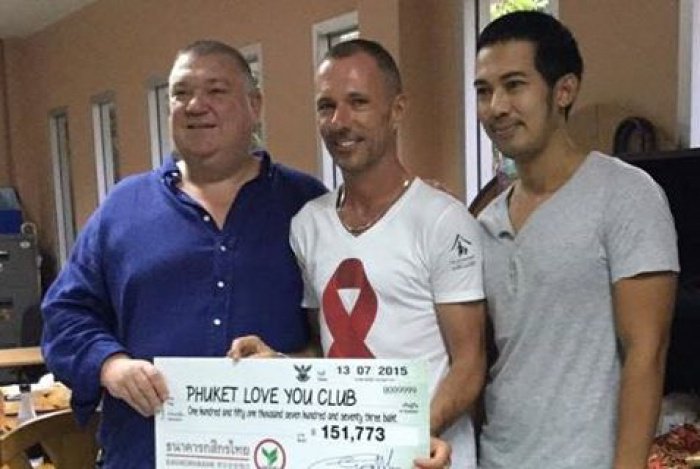 PHUKET: A local English lecturer at Prince of Songkla University (PSU) raised more than 150,000 baht for the Phuket Loves You Club (PLU) during the Laguna International Marathon last month.

Colin Gallagher had originally hoped to raise 50,000 baht for PLU, which organizes Phuket Pride Week and raises funds to fight HIV on the island. However, as the campaign picked up momentum, Mr Gallagher decided to step up his game from running the half marathon to the full 42.185-kilometer distance.

“I am so pleased with myself for finishing the full marathon. There was a point at which I was not sure, but the support of people cheering me on as they saw the t-shirt I was wearing and knowing how much I would raise by finishing kept me going. I am a huge supporter in what the PLU is achieving in fighting HIV in Phuket and I am so pleased to have raised so much money for them,” Mr Gallagher said.

He finished the run in 5 hours 41 minutes and 43 seconds, wearing a specially printed shirt with the World Aids Day ribbon on the front and ‘Fighting HIV in Phuket’ on the back.

Mr Gallagher raised a total of 151,774 baht for the PLU, which will be distributed to the Life Home Project Foundation, where the PLU assists with funding the education of children from extremely poor backgrounds with HIV or with parents with HIV, and the PLU community projects which aim to increase awareness about HIV and safe sex in Phuket.

“I would like to thank Colin sincerely for raising so much money for the PLU, and what a fantastic personal achievement for him also. It is only through the amazing support we get from the many people like Colin, and for all the people that donate money, that we are able to support our chosen charities and community projects,” said Ian Phillips, PLU chairman. “With this money, it will mean that in just four years the PLU has raised over 1 million baht to help fight HIV in Phuket.”