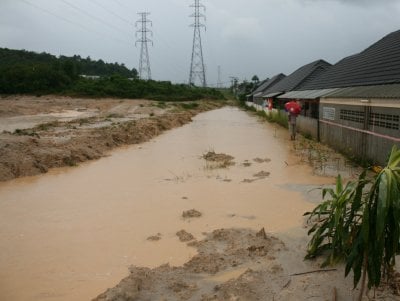 PHUKET: Residents of Rock Garden Phase 5 project in Rassada, who have watched in anguish as muddy floodwaters inundated their homes in recent weeks, will have to wait several more weeks before flood prevention work begins.

Following yet another major flooding late last month, the fourth in two years, about 50 residents on September 26 staged a protest over the inaction.

“The land leveling being done for the new phase now under construction has caused floodwater and mud to enter our homes,” said resident Suntorn Sakunsan, who has lived in the estate for three years.

Yesterday’s torrential rainfall caused water over half a meter deep to dam up against a retaining wall that separates the phase five project from the muddy expanse behind, but the damage to the homes was not as severe as in some of the previous floodings.

Of the 94 houses in Phase 5, about 30 have been inundated. Flooding in 12 of the most badly affected homes has reached window level at times, Mr Suntorn said.

Even worse, the water has caused septic tanks to “reverse discharge” and rendered cooking gas cylinders unusable, he added.

“We always argue with the project developer, but they haven’t done anything for us,” said Mr Suntorn.

“We have filed complaints with Rassada Municipality and the Damrongtham Center at Phuket Provincial Hall. The municipality asked the project owner to solve the problem, but without success,” he added.

Virat Chinprapinporn, chairman of Baan Rock Garden Public Co Ltd, told villagers at the meeting, “To solve the problem temporarily, our staff will keep their eyes open to make sure the drains are not clogged, so when it’s raining hard the water will flow away very well. They will also help clean up any houses and roads in the village affected by floodwaters and mud.”

Some residents blamed the quality of construction of their homes, as floodwaters seemed to have soaked straight through outer walls and into their homes. To this, Mr Virat said he would find out why that problem occurred.

As a permanent solution, Mr Virat said a storm water drain will be excavated to ensure that any runoff from the higher ground behind Phase 5 is diverted away from their homes.

“The village flooded not just because of the new phase being built, but also from plots belonging to other people. Regardless, we will start the excavation after the rain stops in about a month, but I can’t guarantee exactly when that will be. The new drain will take about one month to complete.”

The residents also asked Mr Virat to enlarge drains at the estate, but Mr Virat said that would not be necessary as his plan would put an end to the flooding.

Piyaporn Lawwong, the policy and plan analysis officer in Disaster Relief Division of Department of Disaster Prevention and Mitigation (DDPM), said the flooding was mainly the result of very heavy rainfall.

The project area is not in one of the 14 designated risk areas for flooding and landslides in Phuket, she said.

The Department of Mineral Resources in 2008 identified 14 villages as at risk of landslides: three in Kathu, five in Thalang and six in Muang District.

“The danger area survey was probably completed before this project was built, but perhaps now the department might want to add it to their list,” Ms Piyaporn suggested.

“Most of the areas at risk of landslides are construction zones and elevated sites such as hotel construction sites on hillsides,” she added.

Phuket IT update: ‘Facebook for business’ clinic in Patong