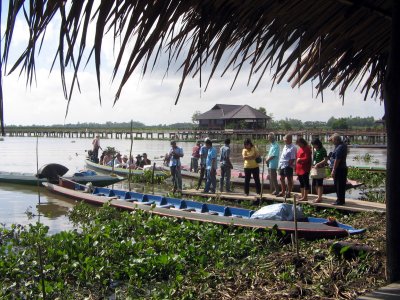 PHUKET: The Thailand Environment Institute (TEI) will tomorrow hold a seminar on global warming, bringing together key Phuket businesspeople and local government leaders to raise awareness of climate change and the possible consequences for Phuket and its tourism industry.

The seminar, to be held at the Phuket Merlin Hotel in Phuket Town from 8:30am to 4:30pm, is being organized under the Rockefeller Foundation’s US$70 million climate change resilience initiative: the Asian Cities Climate Change Resilience Network (ACCCRN).

“Phuket is famous as a tourist destination with beautiful beaches. Millions of people come to Phuket each year, generating a lot of income for the island,” said a statement issued by the ACCCRN.

“Climate change effects that will affect Phuket tourism include changes in sea water temperatures, which will affect coral reefs and marine ecosystems. It also includes increases in sea levels and coastal erosion along land that is currently home to seaside communities, resorts and hotels. If people don’t do anything to stop the problem, it will affect the number of tourists coming to Phuket, in turn affecting tourism and local communities,” the statement read.

Some 80 participants have been invited to the conference, including representatives from local government agencies, private organizations, educational institutions and local branches of environmental NGOs.

High on the agenda are raising awareness of climate change and its impact on Phuket and encouraging local leaders to start devising strategies to cope with the potential effects.

Dr Arnon made headlines earlier this month when he predicted average temperatures in Thailand would rise by up to 4ºC over the next 35 years.

The computer models he used also showed that sea levels would rise by 14-15 centimeters, affecting the entire Thai coastline, he said.

Mr Gray will talk about local readiness to handle climate change, or a lack thereof.

Interested members of the public are invited to attend the event, which is free of charge.

The announcement of the TEI conference in Phuket follows the 6th APEC Tourism Ministerial Meeting in Nara, Japan on September 22.